To celebrate the coming of winter we thought we’d share some of the beautiful snow scenes from the Japanese woodblock print collection at Maidstone Museum. Collections Manager, Samantha Harris, introduces the print collection and some of its seasonal highlights.

As part of its Japanese Art Collection, Maidstone Museum holds over 900 Japanese woodblock prints and books dating from the 17th, 18th & 19th centuries. The majority of these were donated in the 1920s by the local businessman and resident of Mote House (Maidstone), Walter Samuel, who purchased them during his business travels to Japan, and bought collections amassed by other collectors. These include works by the best known print artists, such as very fine female beauties by Utamaro and Gekko, iconic landscapes by Hiroshige and Hokusai, exceptionally rare actor prints by Kuniyoshi and Sharaku and early prints by Harunobu and Moronobu.

Woodblock printing had been used in Japan before the Edo period (1603-1868); mainly to produce religious texts.  It wasn’t until the mid-17th century that the use of printing methods to produce art prints emerged. Initially the prints were black and white but by the 18th century colour was more common. As new colours were developed for printing, so new formats and genres emerged. From the early natural yellow, oranges and greens to the brighter prints of the 1830s when synthetic dyes including Prussian blue were available.

Prints were produced in mass to allow the newly wealthy merchant classes to emulate the aristocracy and have their own art for their walls at home. They could be purchased inexpensively, costing the same as 2 bowls of noodles and this is the crux surrounding their survival, the prints were ephemeral by nature.

In an age before photography prints allowed people to capture and display the world around them in images,hence the name ukiyo-e, meaning ‘images of the fleeting floating world’ for a genre of prints. Although mass produced, Ukiyo-e was routinely censored, often as it celebrated seductive urban life and its pleasures! Popular themes of prints were Kabuki (actors), Bijinga (beautiful women) and fukei-ga (landscapes).

Japanese prints began to be collected in the West at a time when Japan had just opened up to the west with the coming of the Meiji era after 1868.  They give us a window into a world that was entirely different to our own.

There were 4 main groups involved in the production of woodblock prints in the Edo period, sometimes referred to as the ‘Print Quartet’:

Publishers who financially backed the production, commissioning artists to produce works that would be of interest to the public and sell well.

Artists, who would create an original, one-off version of the design, which was to be mass produced, and were often the famous names associated with the artwork e.g. Hokusai, Hiroshige, Utamaro, Kunisada etc.

Woodblock carvers, who would intricately carve the images created by the artist, brushstroke by brushstroke into the printing blocks, often made of cherry wood. This would be done over multiple blocks, per colour, which overlapped perfectly to create the final image. There was a huge amount of skill required in this stage of the process, recreating the fluid and iconic styles of different artists in wood.

Printers would ink and expertly overlay the multiple blocks to create mass-produced versions of the final image. This could include complicated effects for the sky and required precision lining up to ensure the ink did not overlap the detailed outlines.

The prints were expertly handcrafted and while the artists are remembered for the designs; it is the woodblock cutters and printers whose skill in reproducing them are to be admired (often anonymously) alongside them.

The majority of snowy landscapes (fukei-ga) in the collection are by the well-known Japanese artist Utagawa Hiroshige (歌川広重). 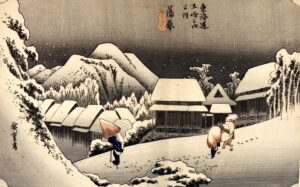 This is a well-known print often referred to as ‘wounded knee’ due to later misprints on the figure to the right. They wear coverings to protect themselves from the snow, including one wearing a mino, a traditional Japanese cape-like garment made out of straw. The buildings in the background show the architecture of the time. 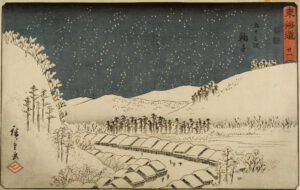 Here the post station of Mariko on the Tokaido Way is represented by a snowy scene of a village situated in the bend of the hills. There are groups of pines and other trees, and small figures can be seen walking on the road between the houses. 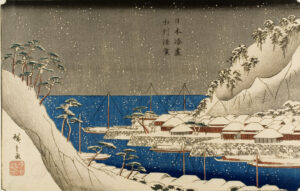 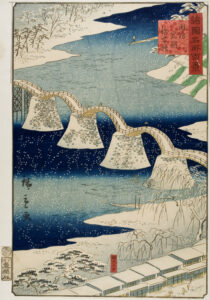 In this snow scene the bridge stands out in white against the blue of the river, the ice-blue shadows on the shore aiding a chilling colour scheme. The village in the foreground is Nishikimi. 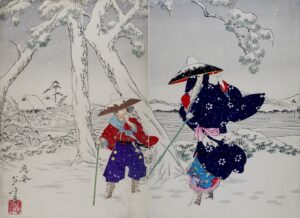 Female figure walking in the snow carrying a small baby. ‘Omae in the snow’. By Toshikata Mizuno from the Meiji period, late 19th Century (MNEMG.Temp.2016.887 & 8)

This scene is made from a pair of prints known as a diptych. Snow is falling and the landscape is covered with snow, a woman carries her child wrapped in red fabric under her clothes through the cold, her footprints are visible in the foreground. She is accompanied by a man; they both carry a bamboo pole to steady themselves in the deep snow. It is one of the later prints in the collection. 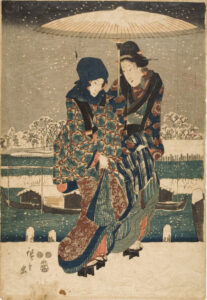 Views of the Four Seasons at Famous Places in Edo (Edo meisho shiki no nagame). Snow on the Sumida River (Sumidagawa setchu no zu). A triptych. By Utagawa Hiroshige , 1847-1852 (Samuel Print 337(ii))

This print is one of a triptych, a set of 3 complementary prints which make up a single image. The snowy river landscape and a moored boat can be seen in the background, with two women on river-side under a raised umbrella. Bijinga prints such as this show great detail in the sitter’s clothing, such as patterned kimono fabric. 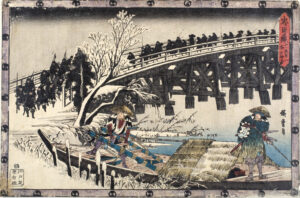 In this Kabuki (actor) print from the story of The Storehouse of Loyal Retainers (Chushingura), two ronin keep watch on a moored boat surrounded by a snowy landscape. More ronin can be seen crossing the bridge in the background. 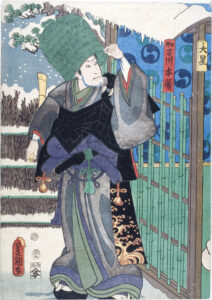 This kabuki (actor / theatre) print titled ‘Act IX. Kakogawa Honzo’ is also from the series depicting the fictional play ‘Chushingura (The Treasury of Loyal Retainers)’ based on an incident involving the 47 ronin. The character of Kakogawa Honzo is the chief councillor of the Momoi family in the story. Dating to 1853 this print is by the famous artist Utagawa Kunisada and shows the character wearing a komuso (basket) hat, with snow falling, settling on a brush fence behind him and a snow laden pine branch 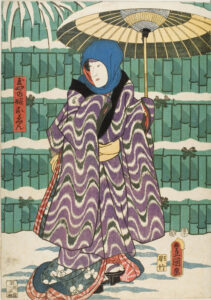 This print shows a male kabuki actor in a female role (onnagata) depicted in a snowy scene. The bottom of the kimono can be seen around low clogs (komageta). Snow appears on the bamboo fence in background and on the drooping tree branches, as well as on the ground. 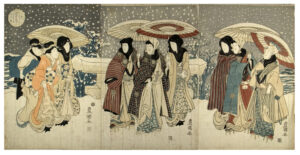 Actors in the Twelve Months (Yakusha juni tsuki). From a series of 36 prints (Sanjurokuban tsuzuki).

This final actor print is from a set of 36 prints, 7 of which are in the collection, each representing one of the twelve months.  Here we see a snow scene in a temple garden. Three groups of actors, with some sheltering from the snow under umbrellas and displaying the Mon (symbol) of Ishimura Uzaemon IX’s clan. If you look closely, the 2nd figure from the right has a Tobako (tobacco pouch) suspended from their obi belt. The snow laden grey sky adds to the chilly atmosphere of the print.

Copies of prints from the museum’s collection can be purchased online, they make great presents and are easy to post!: https://museum.maidstone.gov.uk/product-category/japanese-prints/

Also, for institutions, a touring exhibition of original prints is available for hire: https://museum.maidstone.gov.uk/japan-a-floating-world-in-print/

Representation of Women and Femininity in Japanese Woodblock Prints: https://museum.maidstone.gov.uk/representation-women-femininity-japanese-woodblock-prints/