Maidstone Museum’s Japanese collection is a hidden gem containing almost 5,000 internationally significant artefacts from the Edo and Meiji era. Though there are very few examples of costume within the collection itself, we can see the fashions of these periods represented in the prints and photographs held. This fashion includes the kimono, an iconic garment, embodying the national culture and sensibility of the Japanese. It has symbolic status as its shape is largely unchanged for centuries. In this blog we will look at the Kimono through the Museum’s Collection. 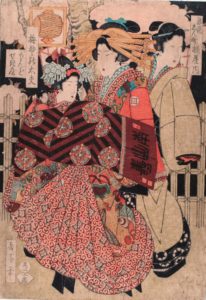 Two Courtesans and a Kamuro by Gakutei, Yashima. c.1825 (Samuel 496)
The fashionably dressed courtesans are pictured on the Nakanocho, the main street that ran through the Yoshiwara pleasure district.

The term kimono means ‘the thing to wear’ and has a history stretching back over a thousand years. By the beginning of the Edo era (c. 1615), kimono were worn by everyone alike – male, female, high class and low class. However, fashions developed and changed, creating some differentiation. For example, in the mid-1600s a distinctive fashion culture developed in Kyoto, which was at the centre of luxury textile production at the time. 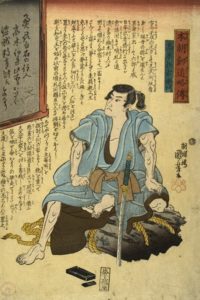 Historical figure Takagi Oriyemon seated on a large rock with rope attached having just written an account of his defeat of a robber gang on the wall.

What is a Kimono?

Kimono are garments which are straight in shape and closed with a waist sash known as an obi. Unlike in Western dress, in Japanese clothing, the body is considered unimportant and instead the surface of the kimono (which should be flat) is most significant. Therefore it is the techniques, designs, patterns and colours of kimono which signify the tastes and status of the wearer.

In the Edo period (1615-1868), kimono were called kosode, which means ‘small sleeves’, due to the size of the opening at the wrist. Other types of kimono included those with long swinging sleeves, known as a furisode, which indicated the unmarried status of the wearer. Also, Yukata (informal summer kimono) literally means ‘bathing clothes’, made of cotton were casualwear for both men and women. There was also the more practical, but less fashionable yogi, a sleeping coverlet. This heavily padded, oversized kimono was used more like a blanket than a garment. 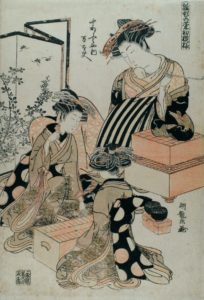 Courtesan and Two Kamuro (from the series Hinagata wakana no hatsumoyo) by Koryusai, Isoda (active 1765-1788). c.1780-1781 (Samuel 424)
The two kamuro are playing a game of sugeroku which is similar to backgammon. One in a series of 100 prints each shows a courtesan and kamuro in exquisite kimono designs. The kamuro wear matching ‘furisode’ kimono, recognisable from their long sleeves which reach to the ground.

Kimono fashions grew quickly in Edo period Japan (1615-1868). During this time the country was politically stable, enjoyed economic growth and its urban centres expanded greatly, with Kyoto (the historic and administrative capital) central to the creation of particularly luxurious and sophisticated kimono. Edo (modern-day Tokyo), later became the focus, being the capital of the shogun (military ruler of Japan). By the early 18th century it was the largest city in the world and developed a vibrant culture embodying glamour, eroticism and entertainment which came to be known as the ‘floating world’ (ukiyo).

Kimono and fashion had an important role in the economy and society of Edo-period Japan, providing many creative and commercial opportunities. 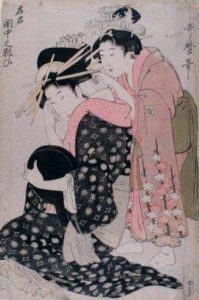 Fashion extended past the kimono. Here a courtesan is putting the finishing touches to her hairstyle, attended by a young trainee, bothwearing beautiful kimono. The spectacular hairstyles were held together using a wax known as binzuke abura. The hair would have been styled and kept in place for up to a week. Special supportive pillows were used at night that stopped the hairstyle from being disturbed.

Kimono could be bought from specialist shops, or customers could buy their choices of fabric and home make their own garments. However, the most wealthy and high status in society, such as the ruling military class (the samurai) would commission their own bespoke pieces. A skilled network of artisans were involved in the production process including designers, weavers, dyers and embroiderers.

Despite sumptuary laws in Edo Japan which were intended to reduce frivolous consumerism, there was still a fashion culture and market for the buying of luxury kimono, not only by the samurai, but also by the lower ranking merchant class who really stimulated kimono production, It was their prosperity which enabled them to keep up to date with the latest fashions and styles, and represent themselves as tasteful and sophisticated in society. 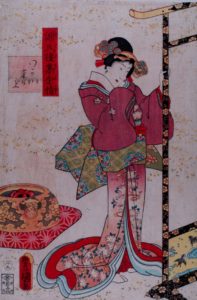 Lady with hand on Lacquered Kimono Stand (from the series ‘The 54 Chapters of the Tale of Genji’ – Genji gojuyojo hatten) by Kunisada (Toyukuni III), Utagawa (1786-1865). c.1858, (Samuel 234)
The image shows a domestic interior, with a lady wearing a kimono decorated in spring blossom. Behind her is a brazier (hibachi), used for heating food and drinks.

The fashion trendsetters of the day were actors and courtesans, many of whom were represented in mass produced ukiyo-e prints, ‘pictures of the floating world’. Produced in their thousands and sold very cheaply (for as little as the cost of 2 bowls of noodles), these gave mass circulation of the latest fashion styles. 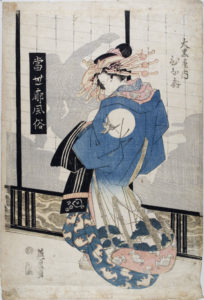 The outer edges of the kimono are decorated with bats and birds crossing a full moon. The courtesan has a coquettish expression as she turns her gaze over her shoulder to meet that of the viewer.

The fashions of courtesans were very commonly represented in prints, such as Bijin-ga or ‘beautiful women’. The pleasure quarters in the major cities (in which courtesans were based) were a closed community but visited by samurai and townspeople alike. The most successful courtesans were well known for their training, sophistication and wit, many becoming famous celebrities and fashion trendsetters in their own right. 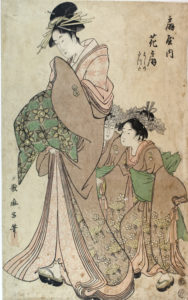 A high ranking courtesan (oiran) and her young attendants wear matching kimono exquisitely decorated with fans and cherry blossom. Utamaro was based in Edo and the image is probably features courtesans from the Yoshiwara pleasure disctrict.

As we have seen, throughout most of the Edo period (1615-1868) Japan had restricted foreign contact. However, in the 1850s, it opened its ports to foreign powers as the miltary rule of the shogun came to an end and the emperor assumed authority again.

During the new Meiji period which followed (1868-1912), Japan wished to promote itself as a hub of modernity, industrialisation and equality, therefore clothing styles took on a political significance. Members of the elite began to wear western dress such as suits and top hats, while women were seen as guardians of the country’s unique cultural heritage and wore more traditional kimono. 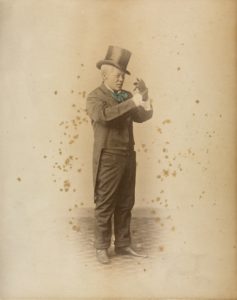 By the Adolfo Farsari studio (‘A Farsari & Co.’) Yokohama, Japan (an early centre of tourism when Japan opened to the world). Circa late 1880s, Meiji era. (Hand coloured albumen prints)

With the Meiji period opening of Japan, the new medium of photography was used to great effect in publicising the country to the world. A number of photographers opened in cities such as Yokohama to supply tourists with (often staged) photographic souvenirs of their visit. These photographs within the collection provide a valuable glimpse of Meiji period kimono, especially everyday garments, such as those of a servant, that do not always survive in museum collections.

All of the below hand coloured albumen print photographs are by the Adolfo Farsari studio (‘A Farsari & Co.’) Yokohama, Japan, and date to the early Meiji era, c.1880s: 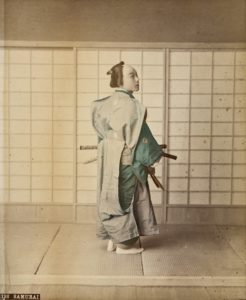 Photograph of a Samurai

Portrait of a man dressed as a samurai and carrying a daishō or pair of long and short swords (katana and wakizashi). c.1880 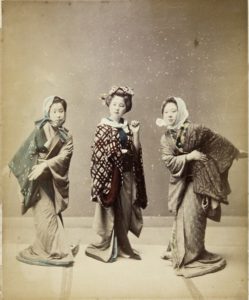 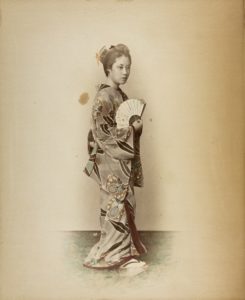 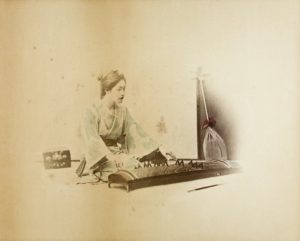 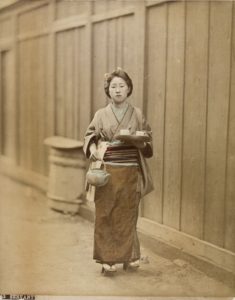 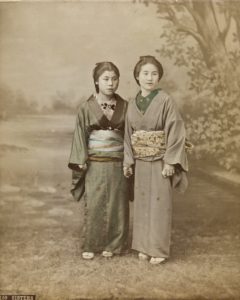 To sum up, the Japanese collections at Maidstone museum show that Japan is a place where past, present and future coexist. Kimono demonstrate this well because, though they may be seen as traditional, timeless and unchanging, they influence fashion and design through the ages and into the future.