In this blog, Samantha Harris (Collections Manager), shares some of the fascinating Fijian artefacts in the museum collection which featured in a research project and exhibition with the Sainsbury Research Unit for the Arts of Africa, Oceania and the Americas at the University of East Anglia. The project did much to blur the distinction between ethnographic world culture objects, and world art, as well as bringing non-Western collections to the fore.

Around 2014/2015 a team from the Sainsbury Research Unit for the Arts of Africa, Oceania and the Americas (headed by Professor Steven Hooper) undertook research into Maidstone Museum’s Fijian collection as part of the Fijian Art Research Project: http://www.fijianart.sru.uea.ac.uk/. This project culminated in a better understanding of the collection and a number of objects being lent to the Sainsbury Centre for a temporary exhibition. This was so successful that a follow up exhibition featuring a number of these objects has more recently been held in the USA at the Los Angeles County Museum of Art. Here we highlight some of the artefacts, all of which had been collected through trade, gift or exchange by Maidstone’s gentleman explorer, Julius Brenchley during his cruise on HMS Curaҫoa in 1865.

Fiji is an island country within Oceania with an archipelago consisting of over 330 islands in the South Pacific. Settled over 3,000 years ago, it has a long history and culture. Fiji came to the attention of British and American traders in the 18th and 19th centuries. The trade routes bought many visitors and collectors to the islands, and a number of these collections have been donated to museums in the West including Maidstone Museum.

At the time Brenchley was travelling, Fiji was arguably the centre of Pacific art. Fijians produced the widest range found anywhere in the Pacific, creating all art forms to high quality, as opposed to some nations who specialised in particular arts such as pottery or barkcloth.

Interestingly, during the Fijian research project, the researchers learned much about the provenance of items from the Fijian collection. They found that the HMS Curaҫoa on which Brendhley travelled, and which was under the command of Commodore Sir William Wiseman, only spent a few days in Fijian waters between 26 July and 2 August 1865. During that time she called at the towns of Levuka and Baum, Brenchley also made a short trip on the Rewa River and spent a day at Lomanikoro in Rewa (Brenchley, 1873). Interestingly, he did not visit the island of Bau personally, though many objects collected by him during this brief visit originated on this island. It is thought that they were acquired there by Commodore Wiseman, or by others on Brenchley’s behalf.

Weapons, particularly clubs and spears, feature heavily in Maidstone Museum’s Fijian collections. This suggests a Western collector’s preference for collecting weaponry, but also that these were art forms as well as practical objects. Clubs and spears show an attention to detail in their craftsmanship far greater than that needed for them to be effective in combat. There were a large variety of forms and styles of weaponry. This suggests regular warfare, production all over Fiji and that the role of weaponry was much wider than simply a fighting implement. They too were a status symbol of the owner, and linked to their identity, often embodying their power. Weapons were also important valuables for exchange, often presented to foreigners and as part of rituals. 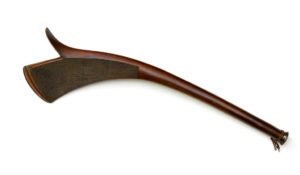 This is a superb club collected by Brenchley and demonstrates the work of a master craftsman, with beautiful form and decoration. Similar examples have been found in museums in Exeter, Hobart and Birmingham, suggesting they were popular exchange items. This is a Cali, a form of club with cross-hatched engraving on both sides of the club head. Another similar form was the Sali club which was of a similar shape, but larger and with a different form of decoration on the sides.

In 19th century Fiji, the head and hair were a focus of decoration and adornment. Both Fijian men and women were renowned for their elaborate hairstyles Hair could be dyed, with red the most popular choice, though other colours were available. It was also treated with lime, primped and burned into dramatic styles and shapes which could be decorated with combs and flowers. Beards too could be decorated, with men pushing combs into their beards. Wigs could be made of human hair or horse hair and were worn mainly by men as a sign of status and fashion. 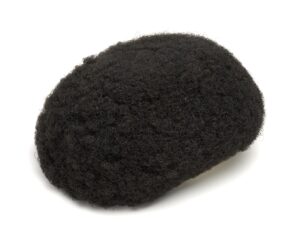 Men would shave their head as a mark of respect following the death of a close relative. Wigs of human hair were worn by such men, as well as those who were losing their hair. They were made with great care and skill, with some mid-19th century examples still containing the reddish mineral colouring with which it was originally decorated. Examples such as this from the Maidstone Museum collection are often human hair or horse hair attached to rigid, basket-like frames made from a coconut leaf, while other examples have a netting base and are flexible.

As in many other countries, the widespread use of bar headrests shows a wish to protect elaborate hairstyles while sleeping. Similar to weapons, headrests (kali) were highly decorative but practical items made in many styles in Fiji including those adapted from Tongan shapes and imported from Tong itself. As mentioned above, it is thought that the popularity of such bar headrests is due to Fijian’s desire to protect their often highly elaborate hairstyles, which a soft pillow would crush. Another reason may be that they allow air circulation on tropical nights! The construction of headrests varied little, usually consisting of one or three pieces in the form of a flat or cylindrical bar on two supports. For a marriage, the bride’s family were expected to provide a range of domestic goods to symbolise their ability to establish a successful household. Such gifts included headrest, which sometimes show the name of the bride and groom scratched on them.

This bamboo headrest (Kali Bitu) from the collection is most impressive for its decoration. The meticulous burnt pattern is known as ‘kamiki vane swastika designs’ (also called manulua, which is ‘two birds’ in Tongan). The single piece of bamboo (bitu) has hollowed ends and is tightly bound with cord to the solid triangular wooden supports to create a decorative and practical object of daily life.

Possibly the most decorative Fijian artform represented in the museum collection is that of barkcloth or tapa. Made primarily by Fijian women, they are famous for the range and quality of their barkcloth, which remains in production today for indigenous cultural use or for tourists. It is a versatile material which can be made in sheets ranging in size from small commercial pieces of less than half a metre to enormous high status presentation cloths (gatu vakatoga) of more than fifty metres long and five metres wide!

The principal material from which barkcloth is produced is the inner bark of the paper mulberry (masi; Broussonetia papyrifera). Once it has been soaked, beaten, felted or gummed into sheets it is decorated with dyes (kesa) using stencils, design tablets, or painted by hand. A variety garments could be made from barkcloth, such as malo which was exclusively worn by men.

Another blog with more details of Brenchley’s Barkcloths from across Oceania can be found here: https://museum.maidstone.gov.uk/the-brenchley-tapas/ 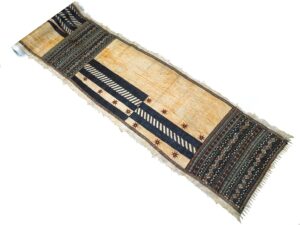 This fine thirteen-metre barkcloth is a highlight of the collection. It is cut at one end, so was originally much longer. The decoration is a mixture of painting, rubbing (tasina) and stencilling. It is believed to have originated from eastern or north-eastern Fiji. As this region was not visited by the collector Brenchley, it was most probably acquired at Bau or Rewa on his behalf. This shows routes of indigenous trades, being on the normal course of visits and exchanges between Fijian kin. Such barkcloths were commonly used for exchanges or presentations too with foreigners, such as to members of a visiting British naval expedition such as the HMS Curaҫoa. 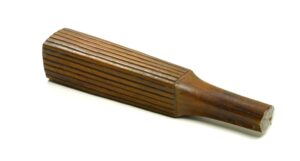 Brenchley not only collected the barkcloths themselves, but also the equipment used in producing them. This is a Tongan-style beater collected in Bau in 1865. It is unknown whether this had been ‘imported’ from Tonga itself and used in Fiji, or made in Fiji in a Tongan style. Large Tongan-style barkcloths were made in eastern Fiji (gatu vakatoga or gatu vakaviti). These involved thicker and less fine sheets than those required for masi kesa, kumi or masi bolabola (the backcloth above). Due to this different texture, the tools used varied accordingly. Heavier wider beaters with fewer grooves, such as this example, were used. This example has different shapes on the sides for different faces in the creation process. Three grooved faces are used to beat and bind the fibres, while the fourth plain side provided a final beating and smoothing effect. 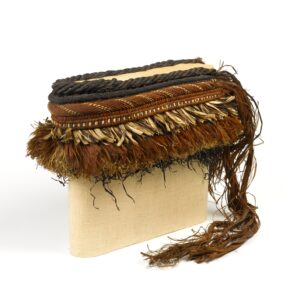 Finished garments made from barkcloth were also collected. This is a skirt of liku which shows the Fijian layering of different materials, including white barkcloth strips. By the 1860s the making and wearing of liku was in decline as areas of Fiji became Christian and clothing styles changed. This example shows techniques of plaiting, looping and binding.

Hooper, Steven. 2016. Fiji: Art & Life in the Pacific. Sainsbury Research Unit for the Arts of Africa, Oceania & the Americas: University of East Anglia.