Tapa cloth, or simply tapa, is a barkcloth which has been produced from as early as the sixth century B.C. While there are examples of tapa from across the globe, it is from the Pacific Islands that the craft is most associated with and where the Brenchley tapas held by the Museum originate from.

Julius Brenchley, the ‘gentleman explorer’ of Maidstone, was a passionate collector of art, ethnography and natural history. Brenchley travelled extensively, with only the continent of Antarctica left untouched, but it was the Pacific Islands where he was especially active. He joined the Curaçoa at Sydney on its cruise of the islands on 4th June 1865, returning to Australia in September. Unlike many of his peers, Brenchley appeared to travel with a genuine interest in how other people lived, what their cultures involved and the 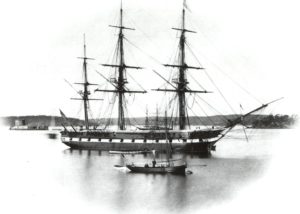 artefacts they used. He therefore saw his work and collecting as a way of contributing to creating an important record of the state of the islanders before their habits and characters were altered by contact with missionaries and settlers. As a result, he amassed a large collection during the cruise, some of which is also held by the British Museum. Maidstone Museum holds around 80 pieces of tapa, the vast majority of which were collected during this cruise.

Why are they called tapa?

The cloth is known by several local names across the Pacific Islands, such as masi in Fiji and siapo in Samoa, but the term tapa has become the universal name for these cloths. There is much debate where the term originated from. The two most common arguments suggest the term likely derived from either the Tongan and Samoan ‘tapa’, meaning the uncolored border of a barkcloth sheet or the Hawaiian ‘kapa’, (pronounced ‘tapa’) meaning ‘the beaten’. It is believed that the term was introduced to the rest of the world through European contact in the early nineteenth century.

The cloth would have been created from strips of bark taken from specific trees, the most commonly utilised being the paper mulberry tree. The men would harvest the inner bark, which would be dried in the sun before being soaked in water. Women would pound the pulp created with grooved wooden beaters, softening and expanding it by several inches. Larger sheets were made by either felting or pasting. Felting involved placing the beaten strips either on top of each other or slightly overlapping, water and additional beating would then be used to mesh the fibres of the strips together. Pasting involved using natural starches, such as arrowroot, to paste together the edges of two sheets. Once the desired thickness and length were achieved, the tapa would then be decorated. 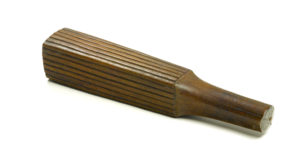 This is a Tongan-style beater, which was collected in Bau in 1865, during the voyage of HMS Curacoa. The beater has three grooved faces and one plain. The plain side would have been used for the final beating and smoothing of the cloth.

Tapa would be coloured and decorated using a variety of dyes, paints and designs. Traditionally, the colourants used for the dyes and paints were produced from plants, trees and earth pigments, which were native to the areas, such as ground turmeric for yellow and the mud of a taro swamp for black. Often a background colour would be applied to the tapa, which could be left plain, but was more often decorated.

The design elements chosen were most likely influenced by things the islanders were familiar with and their own interpretations of these. The sea, mountains, fauna and flora were common motifs depicted, though geometric designs were highly favoured and widely used. Any number of effects were used to create these designs, such as stamping, painting, stencilling, printing, staining and smoking. Though there were similarities across the islands, which was largely influenced through trade, the final decoration could often be attributed to a specific island or island group, with many having their own distinctive patterns.

The size of the tapa and level of decoration would have been informed by its intended use, which was incredibly varied. The cloth was primarily used as clothing, serving both daily and ceremonial use. The cloth would have been worn in a variety of ways, ranging from headdresses and turbans to skirts and loincloths; individuals would have been surrounded in tapa at key events, such as at births, weddings and deaths. Though clothing was its common use, tapa wasn’t limited to just being worn. It would have been made for dowries, diplomatic gifts or for treaty agreements, the cloth also held a place in the home as bedcovers, wall dividers, or mosquito nets.

This versatility of the tapa created a rich and diverse tradition, with the sophisticated plant-fibre technology highlighting the creative and technical skills of the islanders. Though the introduction and increased availability of woven cloth made in Asia and Europe led to a significant decline of hand-produced tapa, altering its use and design, there are still many islands that continue with the tradition, such as Tonga, Fiji and Hawaii. Below are just some examples of this beautiful craft held by Maidstone Museum.

This fine piece of tapa is from north-eastern or eastern Fiji. The tapa has a ‘bloabola’ motif, which translates to ‘divided up’; it is composed of six rectangular sections of geometric design, which would have been applied through the combination of painting, rubbing ‘tasina’ and stencilling. It is thirteen metres long, though is cut at one end, so would have originally been longer. The intricate design and length of the tapa would have required intensive hours of work, with multiple women working on the piece at a time.

The tapa has been lent and displayed twice in the exhibition, ‘Fiji: Art and Life in the Pacific’, first at the Sainsbury Centre in 2016 and then at the Los Angeles County Museum of Art in 2019-2020.  It has become a highlight piece at LACMA, where the museum guides use it as one of the discussion points in the exhibition tour. The below photo shows it being installed at LACMA and helps to give a sense of the scale of the cloth; magnets evenly spaced out were used to safely display this magnificent piece. 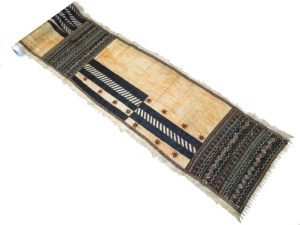 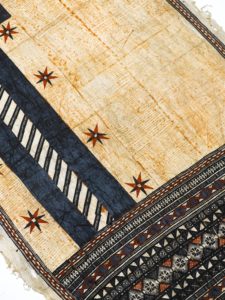 Little is known about early Niuean tapa cloth prior to the 19th Century. There are accounts of Niueans wearing it as a loincloth, and it is highly probable they had a native tradition of tapa beyond this. Niuean tapa-making, that we see in Museums today, was introduced to the island in the 1830s by Samoan missionaries who were a part of the London Missionary Society. Despite this, a distinctive, indigenous style of decoration had emerged by the late 19th Century. Applied freehand, they created complicated and detailed geometric designs that incorporated fine lines and floral motifs. Niuean tapa stopped being produced by the 20th century, making these pieces, and others held by museums, important pieces of a lost craft. 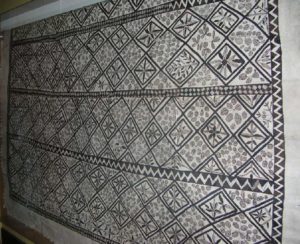 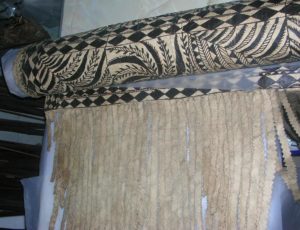 The two lighter blue cloths are both from Santa Isabel, which was known for this coloured tapa. The provenance of the darker tapa is unknown, though it is likely from the Solomon Groups, if not Santa Isabel. The deep hue of the blue is highly unusual.

The blue dye comes from pau (wild indigo), which grows in tropical and subtropical areas of the Pacific. The colour could be applied by spitting the dye onto the cloth, which is evident on the patterned tapa. The HH and dugong motif of the patterned pieces outlined in this way were diagnostic of Santa Isabel. It is possible that the plain piece would have been used for trading between islands, with the blue cloth being a particularly valued commodity.

The use of tapa was nearly lost in Santa Isabel with the arrival of missionaries, who believed the tapa coverings were too skimpy and thus unacceptable to wear. However, recent cultural festivals have encouraged women to rediscover the unique blue tapa worn by their ancestors, with the cloth being worn as a wraparound skirt by women’s dance groups. Despite this revival, the exact extraction method used to obtain the indigo remains unknown, with the tapa being worn today coming from earlier periods. 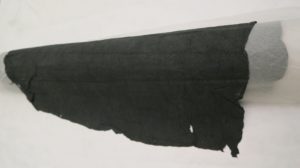 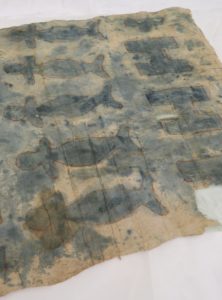 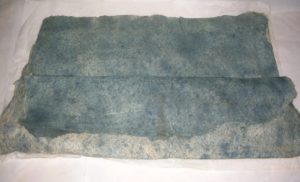 Hooper, Stephen, Fiji: Art and Life in the Pacific (2016) Sainsbury Research Unit for the Arts of Africa, Oceania & the Americas

Peabody Museum of Archaeology and Ethnography, ‘Wrapped in Tapa: Its Role and Use’ https://www.peabody.harvard.edu/node/2271, accessed 2020-03-24