What killed the dinosaurs? By Tony Mitchell, Museum volunteer

Many thousand years ago, probably in the Mediterranean area or Near East, there was an earthquake.  Sticking out of the ground someone saw a huge leg bone.  Usually when these bones were occasionally found they were dismissed or even ignored.  This time, however, the finder wondered what it was, what animal it came from, and how it got there.  Writing and books were unknown, so she made up a story that fitted what she knew.  Later, probably much later, the ancient Greeks embellished her story and ‘invented’ a race of giants, the Titans, which they fitted into their stories of the Gods to explain other phenomena from earthquakes to storms and echoes.

This is a story of course, but this is how we first hear about dinosaurs, in the stories people told about unusual things they had found. These people were the first scientists.  In modern times, scientists work in exactly the same way as those ancient Greeks.  They notice, and wonder.  Then they make up an explanation.  This is called a hypothesis.  It may or may not be true, but it does explain all the ‘facts’ as far as they are known at the time.  They then go further and try to create another, different, explanation.  Which one, if any, is correct?  The method is to find other evidence that supports or disproves one, or both, of the hypotheses.   Eventually, only one story holds water, and is published so that anyone who is interested can decide for themselves if it is correct.  They will have knowledge and experiences that the original scientist did not have, and will, or at least, should, make them known, especially if they refute the original hypothesis. A new hypothesis may then be created and tested in the same way. 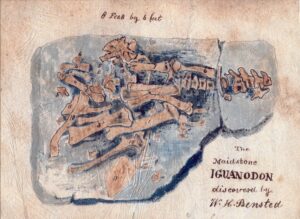 A drawing from W H Bensted’s notebook showing the remains of the Iguanodon atherfieldensis found in a quarry in Queen’s Road, Maidstone in 1834. The 19th Century was when scientific study of fossils became widespread. 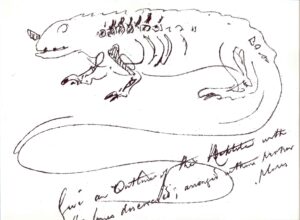 At one time it was noticed that dinosaurs which had lived on the earth for 150,000,000 years, suddenly disappeared from the record.  They all became extinct.  Well over 100 hypotheses were created to explain this extinction, from the eggs being eaten by newly evolving mammals, to volcanoes in India, nuclear winters, disease and a meteorite strike.  All but one explanation can so far be disproved.

The Indian volcano held sway for a long time as an enormous volume of lava, called the Deccan Traps, was extruded which should have had a major effect on the world climate.  It is now certain that the eruptions did not occur at quite the right time.  A much earlier series of eruptions, in what is now Siberia, produced a lava flow comparable in size to western Europe.  It may have set fire to a large coal field creating a major temperature increase. This is thought to have caused the Permian Extinction that was when over 90% of life went extinct

So what did cause the extinction of the dinosaurs?  The true answer is ‘we don’t know’.  The most probable answer is that a large iron meteorite hit the earth on the edge of the Yucatan peninsula.  The whole meteorite, along with the local rock was vaporised, and carried in the atmosphere around the world.  Even the debris from large volcanic eruptions can be carried for thousands of miles.  After the Krakatoa eruption the atmospheric dust caused colourful sunrises and sunsets in England.   Careful work by geologists shows that the fallout from the meteorite collision can be found in widely dispersed places around the globe.  The layer, often less than an inch thick, contains the element iridium, an element that is very rare in the earth’s surface rocks, but common in the core.  Iron meteorites are considered to be pieces of the core of a disintegrated planet and are rich in iridium.

If the meteorite had arrived even a few minutes earlier, or later, the effect, though massive, would have been far less fatal.  Unfortunately for the dinosaurs, it hit an area of rock that contained, in its structure, lots of sulphur.  This recombined in the atmosphere into sulphuric and sulphurous acids.  The effect of the resulting acid rain was disastrous for plants and the sulphur remaining in the upper atmosphere reflected sunlight creating a negative greenhouse effect.  This was followed some years later by greenhouse heating produced by the release of C02 from the burned and rotting plants

Immediately below the iridium layer, dinosaur fossils can be found but never above it.  But absence of evidence is NOT evidence of absence.  Dinosaur fossils are uncommon anyway, so it is unsurprising that their bones can’t be found. Other fossils, especially very small ones, are far more common.  In fact chalk is almost solid fossil.  The rock above and below the iridium layer is identical, apart from the fossils.  They disappear from the rock immediately above the iridium layer, and larger fossils do not become abundant for a million years or more.

It is a large and fascinating subject. If you would like to find out more check out these resources :

For children with adult guidance:

The BGS Geological Timeline, 65 million years ago, Extinction of the dinosaurs, https://www.bgs.ac.uk/discoveringGeology/time/timeline/monthEight.html