What Do I Do With My Collection? ~ Tony Mitchell, President of the Medway Fossil and Mineral Society

What Do I Do With My Collection?

As President of Medway Fossil and Mineral Society [MFMS], I am often asked about disposing of a deceased person’s fossil or mineral collection. “We don’t want anything for it”, is the easiest to deal with. The next, “Is it worth anything?” is more difficult.  I usually answer that it is worth whatever you can persuade someone to pay for it, so you can sell them, a few at a time on-line, or sell the whole lot to a dealer.

Lastly, they sometimes say that “He / She wanted it to go to a museum” and is also quite easy to answer. In general, museums are very reluctant, or unable, to accept collections.  The main reason being that there is neither staff nor money to curate a collection unless there is a very, very good reason why the museum should accept it.  Even small parts of a collection or individual items are only accepted when they fill an important gap in the museum’s own collections. For example, military medals may be accepted by a military museum if they are ‘special’ and tell a story that is important to the regiment.

It is mostly a matter of provenance.

A member of MFMS died at the beginning of the first Covid wave while we were not meeting, and we did not hear about it until six months later.  We knew he had a very extensive collection, and I was asked what should be done with it.  When travel once more became allowed, I visited his house, about an hour’s drive away, armed with notebook and camera.  There were over 120 drawers full of fossils and here is Photograph [1] of the drawer I numbered 104. 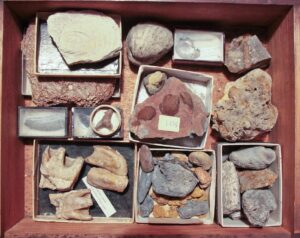 What you don’t see are many labels.  The one in the bottom left reads ‘Mammalian Teeth Pleistocene Foreign’. Of interest to a general collector, but not a serious one, who would pay well if he knew exactly where it had come from. The identification of the animal can come later.  The one above it on the left has a much more informative label including its name, where it was found and the layer in the cliff it came from.  Now that makes it of more value than the teeth even though it is far more common.

Photograph [2] is of the top of a cabinet.  The big, coiled ammonite is worth up to £100 for its decorative value.  If we knew where it was found, its value would increase some 5 or 10 times and might be happily accepted by some local museum if they did not already have a specimen.  Without provenance, a museum would not be interested. 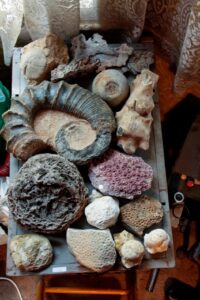 The rather uninteresting-looking specimen below it on the left in image 2, is actually rarer and far more interesting and valuable than the ammonite, IF ONLY IT HAD PROVENANCE.  It didn’t.

Because of the limited documentation there was no museum interested in the collection left by the collector.  In the end the family decided to sell it to a dealer. As is the way of such things much of the material  will then be sold on to other dealers who will make an ‘educated guess’ as to the provenance and sell individual items at shows and on line over the next several years.

Maidstone Museum has a collection which provides a good example of how to document your collection if you would like it to be of use to researches and possibly enter a museum where others can study it.

This collection was put together by Mick Cuddeford  and was happily accepted by Maidstone Museum many years ago. It is still not fully catalogued.  As a volunteer, I am photographing each specimen to add to the already comprehensive information on the database that came with it. 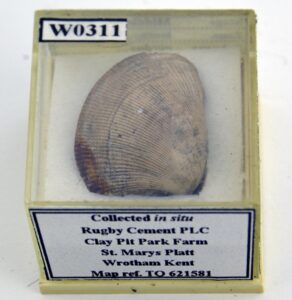 In Photograph [3], the number, W0311, is also stuck on the back of the fossil and is the link to information in his catalogue.  Here there is full information as to where the fossil was collected, including map reference, something which is easy to do nowadays at the time of collection using a mobile phone.  This is the basic minimum information that needs to be recorded.

The side of the box, Photograph [4], contains the name of the specimen.  The site is all that is normally recorded, as it is sometimes difficult to find the name of fossils without specialist books. Usually just Bivalve will do if you are not sure.

Another bit of information, that is not really necessary, but valuable for a researcher is the name of the person who decided what this particular specimen was. Something that is frequently omitted, and I plead guilty in this respect, is the date it was collected, in this case Mick Cuddeford collected and determined its name in September 1995. 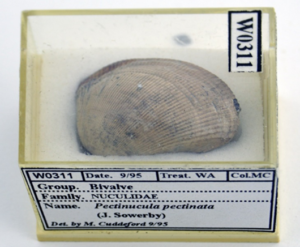 Finally, the information that is of interest to researchers and museums has been stuck onto the other end of Photograph [5].  This is specialist information including even the bed it was found in ‘Bed 123, 13 cm below bed 124’.  This is linked to a complete section of the quarry face which Mick was researching before he died, and he never had a chance to complete a write-up.

Mick has also noted that his bed 123 is equivalent to division 5(iv) at Ford Place which was surveyed by Owen, Director of the Natural History Museum, in the mid- 1800s.

The moral of the story is that if you want to have a collection of any sort, paintings, medals, fossils etc good provenance is essential for it to be of any real value in the future. 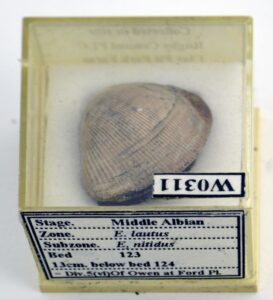 A museum’s first ‘duty’ is to conserve artifacts, but which artifacts, depends on the museum.  The museum of teapots will probably not be interested in fossils but might be interested in photographs and paintings of teapots.  Local Council Museums were usually started with whole collections donated by wealthy patrons when they were founded, but due to limited resources they specialise over time, usually in the local area. Good record keeping pays dividends if you would like your collection to be appreciated in the future and possibly enter a museum.

Unfortunately, many fine collections finish up in a skip.  Don’t let yours follow them.