From a Maidstone practice to Chief Surgeon for Henry VIII
‘if not gentle by birth or by profession, an honest and true heart’
Back to all posts 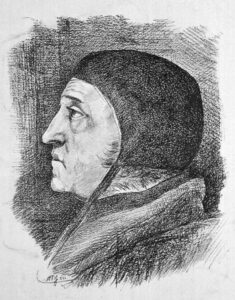 Thomas Vicary was born at some time in the early 1490s. He was licensed to practice surgery by Richard Fitzjames, Bishop of London, on 28th March 1514 after examination by four past masters of the Barbers’ Company and the physician John Smythe. The Barbers’ Company was a Guild, a Medieval Association of trades.  Barbers performed blood lettings and other forms of surgery early on. Hence the association of Barbers and Surgeons.

According to a reference in the barrister John Manningham’s diary of April 1602 Vicary initially practised as a barber surgeon in Maidstone until advanced to the position of surgeon to Henry VIII after treating him for a sore leg in 1527, as told to Manningham by his elderly cousin who lived in East Malling. At that time Vicary was already a member of the Company of Barbers guild in London, which had been given a charter in 1462 by King Edward IV to regulate the practice of surgery in London, and had been elected to the office of Third Warden in 1525. It seems that the King was so impressed by Vicary that not only was he appointed as one of the King’s surgeons but also promised the post of Chief Surgeon when it became vacant as happened in 1530. In the same year Thomas Vicary became Master of the Barbers’ Company. In addition in 1539 the King granted to Vicary the tithes, glebe, and house of the rectory of Boxley with ten pieces of land previously belonging to the monastery of Boxley, the lease to run for 21 years at an annual rent of £40. Three years later, ‘for good service to us’ Henry rewarded Vicary and his son William with the post of Bailiff to Boxley Manor from 25th March 1542 for life. This was renewed to Vicary alone (William presumably no longer living) by Queen Mary in 1558.

The role of Chief Surgeon involved not only services to the Royal Household but also a presence during torture for persons duly referred so as to ensure preservation of life, and a further role when necessary was as an embalmer.

Vicary was also surgeon to St. Bartholomew’s Hospital in London, which had been permitted to continue to function following the dissolution of its associated priory in 1539.  In 1546 Henry VIII handed the running of the Hospital to the City of London and Vicary became one of the six new governors but with the responsibility of resident superintendent. He was provided with a house in the grounds of St. Bartholomew’s Hospital maintained by the governors, but shortly before his death in 1561 he moved to a house in nearby Duck Lane, the ‘Corner House in Paradise’, rented to him by the hospital governors on terms permitting him and his wife to live there for 40 years or until their deaths.

During the early 1500s there were two groups of surgeons, those who were members of the Barbers’ Company, termed men of the short robe, and higher status university educated members of the Guild of Surgeons, termed men of the long robe. During his Mastership of the Company of Barbers Vicary sought to unite these two groups in the interests of facilitating the regulation and teaching of surgery and establishing the specialty as a profession. He was successful in his negotiations and in 1540 by act of parliament the Company of Barbers and Surgeons was established with Vicary as its first Master. From then no surgeon could perform the tasks of a barber and vice versa and the practice and teaching of surgery benefitted greatly from much tighter control. To commemorate the union a painting by court painter Holbein was commissioned showing Thomas Vicary, accompanied by the royal surgeons on the King’s left and his physicians and apothecary on his right, receiving the charter from the King. The painting in oil on an oak panel is still in possession of the Barbers’ Hall. It has been suggested that the fact that the painting includes the royal physicians and apothecary might reflect Henry VIII’s wish that ultimately there would be a unity of all branches of medical care. 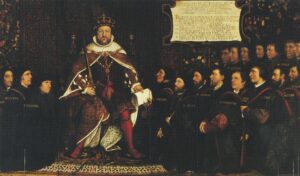 Image 2: This Photo by Unknown Author is licensed under CC BY-SA Hans Holbein, Public domain, via Wikimedia Commons, https://commons.wikimedia.org/wiki/File:Henry_VIII_and_the_Barber_Surgeons,_by_Hans_Holbein_the_Younger,_Richard_Greenbury,_and_others.jpg From the Collection of the Worshipful Company of Barbers.

John South, in his 1886 publication ‘Memorials of the Craft of Surgery in England’ describes Thomas Vicary as ‘not improbably not a very learned person, he had sufficient common sense to perceive that only by general education was his profession to be raised.’

He does go on to say later in the manuscript that Vicary was ‘if not gentle by birth or by profession, an honest and true heart overflowing with kindly feelings towards his fellow men and earnestly desiring to lead his professional brethren along that path which could alone raise them to the station he was anxious they should attain.’

Vicary was a noted teacher of anatomy and was successful in procuring an arrangement for the provision of four bodies of executed criminals each year for the purposes of dissection. He produced an anatomy text as a teaching aid ‘The True Anatomy of Mans Body’ which borrowed heavily from 14th century manuscripts of Lanfranc of Milan and Henri de Mondeville of Montpellier both of whom worked in Paris. Consequently, Vicary’s text in English (taken from an earlier translation by an unknown English surgeon) was already out of date in comparison with contemporary work, the Fabrica, published in Switzerland by Andreas Vesalius. Possibly this was due to the fact that Vesalius’ work was published in Latin in which Vicary was probably not proficient, but it is also known that there was a reluctance on the part of the main teachers of anatomy at that time to accept change. Although publications of the True Anatomy some years after Vicary’s death attributed the work entirely as Vicary’s he had never formally published it nor claimed authorship himself. 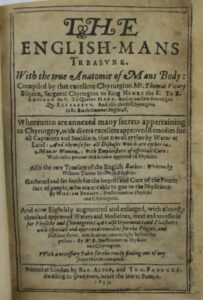 The English-Mans Treasure by Thomas Vicary, title page from the Maidstone Museum Collection

The arrangement of Barbers and Surgeons lasted until 1745 when the surgeons left to form their own company which was granted a Royal Charter by King George III in 1800 to become the Royal College of Surgeons. Nevertheless, the two separate organisations maintained friendly relations and in 1919 the Court of the Barbers’ Company offered to fund an annual lectureship in the Royal College of Surgeons on the history of surgery and anatomy, initially for five years. This offer was accepted, and the first Thomas Vicary lecture was delivered by Sir John Tweedy on December 3rd of that year.

After the death of Henry VIII Thomas Vicary continued in the role of Serjeant-Surgeon to Edward VI, Mary, and Elizabeth. Vicary died in 1561 but no record exists either in London or Boxley of precisely when or where he died or was buried.  According to his entry in the Dictionary of National Biography (Vol. 58 1885-1900) he was married twice, first to the sister of Thomas Dunkyn, a Yeoman of Shoreditch, with whom he had one son William who predeceased him, and in 1547 to Alice Bucke, who survived him. In his will proved by his wife in the Prerogative Court of Canterbury in April 1562 he bequeathed to his nephew Stephen Vicary a house which he had bought from John Joyce in 1557/8 situated next to Boxley church. In addition there were some charitable gifts to the poor of London and Boxley, personal items to former colleagues and friends with the residue to his wife.

Cave-Brown J, History of Boxley parish. 1892 Will of Thomas Vicary.