The Value of Revisiting Archae

May Blog - In 2018 a PhD study of Iron Age remains at Maidstone Museum, including a DNA analysis, casts new lights.
Back to all posts

‘The Value of Revisiting Archaeology’ By Dr Michael Legge

One of the only surviving excavation photos from 1955, showing an archaeologist cleaning one of the more complete inhumations. The legs of the skeleton have been truncated by quarrying, and an extra pelvis bone near the head, plus a pile of other bones, suggests this burial disturbed an earlier deposit. The later individual was placed with a pottery vessel and a brooch.

In 1955, chalk quarrying at Highsted, Sittingborne uncovered a number of burials. Emergency rescue excavations were begun in earnest, led by D.T.A. Ponton of the Kent Archaeological Society, hoping to recover as much of the archaeological material as possible, and save the skeletons from the quarrying.

Local newspaper reports from the East Kent Gazette mention a total of 20 inhumation burials (skeletons) and six cremations were recovered, thought to belong to the Late Iron Age period (c.100 BC- AD 43).

It was reported that the burials at Highsted were accompanied by several pottery vessels, and at least one was in a lead coffin. The pottery was thought to belong to the La Tène type, a material culture that flourished across Europe in the Late Iron Age, identifiable by elaborate spiral patterns and stylised animals on metalwork. Examples of this can be seen in the British Museum and across the UK, including the Battersea Shield (shield | British Museum) and the Snettisham Great Torc (torc | British Museum)

Unfortunately, shortly after excavation, most of the records, photos, and associated finds were stolen (Kelly, 1978: 267). Only six photographs, taken by a member of the public, were spared. The finds could not be analysed, and the cemetery at Highsted began to be forgotten. In 1977 though several of the pottery vessels turned up, donated to Edinburgh Museum. It is unknown how they made their way to Scotland, but the museum sent photos down to Maidstone and they were confirmed to be the same vessels from Highsted.  By 1981 it was thought in the archaeological community that the human remains were lost alongside the rest of the stolen material, and any hope of publishing the finds was gone (Whimster, 1981:27). In 1987 the human remains were located, given a preliminary analysis, and sent to Kent County Museums service, but this too was never published, and the material was again forgotten.

I visited Maidstone Museum during data collection for my doctoral research, investigating burial practices in the Iron Age of eastern Britain. I was trying to gather all the data I could, to create a database of sites that would allow me to better understand how people were treated after death and find the treatments specific to different regions. This in turn allowed me to better understand the lives of the dead, but also the thoughts, beliefs, and values of those that buried them. I had come to Maidstone Museum to look at some material from another site, but while I was there, Pernille Richards re-discovered the Highsted human remains, bringing them back to the world for the first time in years and allowing us to finally shed light on the assemblage.

Sometime between their discovery in 1955 and now, they had become mixed, making it very difficult to identify exactly how many individuals were present. The remains in the boxes had an MNI (Minimum Number of Individuals) of 18, meaning that most, if not all, of the inhumations had been found!  The MNI is calculated by finding the most common non-repeating bone, in this case the left femur (thigh bone). Everybody only has one left femur, so we know that if there are 18 present, there must be parts of at least 18 people in the boxes.

I analysed the remains and managed to assign many of the bones to specific individuals. Both males and females were present, but the population was largely adult, so any children must have been buried elsewhere. There was evidence of common pathologies (trauma and disease) among the skeletons, including extensive tooth loss, abscesses and osteoarthritis. 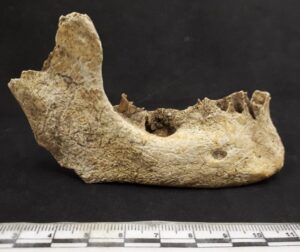 A photo of the lower jaw (mandible) of one skeleton, showing extensive antemortem (before death) tooth loss, and a severe abscess, which eroded the bone around the molars.

I took samples from the teeth and bones of some of the skeletons, to be sampled for radiocarbon (AMS) dating, isotopic analysis (Isotope analysis – Wikipedia), and ancient DNA testing. Isotopic analysis allows archaeologists to examine the values of different isotopes that build up in human bones and teeth as people grow, eat, drink, and move around. We can tell where a person may have grown up, and what their diet consisted of, through these isotope values. For example, marine animals contain certain amounts of δ15N (Nitrogen). As organisms eat each other, a portion of this is transferred to the predator. So, if a person had a diet rich in fish/marine life, we would expect them to exhibit a high δ15N value. We can do the same thing with isotopes of carbon and zinc to understand which types of plants, and how much meat people were consuming. Oxygen isotopes are transferred through groundwater, and so can give an indication of where someone lived, based on the water they drank at different points in their life.

The DNA analysis was undertaken by Harvard University, and the University of York, as part of a larger project into population movement and familial relationships in the past (Large-scale migration into Britain during the Middle to Late Bronze Age | Nature).

Five human bones were successfully analysed for aDNA, which also gave a genetic sex determination. We were able to say that three of the individuals were female and two were male, and that none of them were related, perhaps suggesting a reasonably large population in the area. The oxygen isotopes were all consistent with a local population – these people had not moved to Kent from the continent, despite being buried in a way that had continental origins and with La Tène pottery. The dating results were perhaps the most exciting – the cemetery continued from the Late Iron Age, through the Roman Conquest in AD 43, and on into the Romano-British period, possibly even to AD200. This shows us that the population was not replaced by the conquest, and their burial practices were not greatly altered despite Roman rule.

The site of Highsted has so much archaeological potential and is a fascinating link to Kent’s past; thanks to Pernille Richards and Maidstone Museum, these people, buried for almost 2000 years, then found, lost, and found again, can be brought into the public eye through new research and greater understanding of their lives, and their deaths.

Legge, M. Ph.D. Thesis. The lost, the buried, the scattered and the curated: A multidisciplinary approach to the uncremated dead in the Iron Age of eastern England. Cardiff University (unpublished).