The Name of the Regiment.

The Name of the Regiment By Steve Finnis, Museum volunteer

When I joined the army as a National Serviceman many years ago, I was very proud to wear the shoulder title “Royal West Kent”. Very smart, white on red ground for infantry, and as I had always known, the very best of all the regiments. 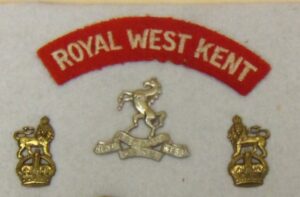 Then to my great surprise I found that proper regular soldiers didn’t call the regiment “Royal West Kent” at all, but “The Queen’s Own”. What was going on?

The regiment started life in 1756 as the 52nd Regiment of Foot. Then the 50th and the 51st were captured in North America so the 52nd was renumbered as the 50th.

In 1782 it was decided to link infantry regiments to counties to forge local links and aid recruiting. The 50th was ordered to take the title “50th (or West Kent) Regiment”. But still no Queen.

In 1827 the regiment was presented with new Colours by the brother of King George IV, the Duke of Clarence, and in commemoration of the occasion, the title was changed to “50th (or The Duke of Clarence’s) Regiment.

In 1830 the appalling George IV died, and his brother ascended the throne as William IV. As he was now King, he decided to rename his regiment for his wife, so the title became “50th (or The Queen’s Own) Regiment”. So, our Queen is Queen Adelaide and the name was not to commemorate some great deed, but it was unique and therefore proudly borne. In 1881, when the numbered regiments all became county regiments, the 50th and the 97th became “The Queen’s Own (Royal West Kent) Regiment “, and as such went through the First World War. 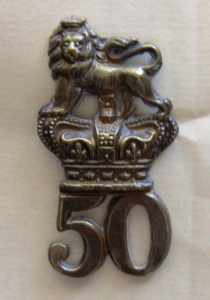 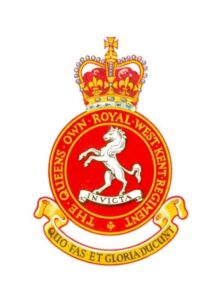 Do these things matter? Well, yes they do, or at least they did at the time to the people involved. Things like titles, buttons, badges, and other special bits of uniform, traditions and battle honours are still of huge importance to regiments, if not always to outsiders. Think the kind of allegiance signalled by football club scarves; then multiply by ten. At least!

You can also read more on the website: https://museum.maidstone.gov.uk/our-museums/queens-own/