By Pernille Richards, Collections Officer
Back to all posts

Two of the museum’s long term ‘residents’ have just returned to display after conservation work at West Dean College of Arts and Conservation. The wooden figures of two school children, a boy and a girl, have been in the museum since 1891 and have been on display in the Great Hall for many years. The need for conservation work on the female figure has been a great opportunity to highlight their story. 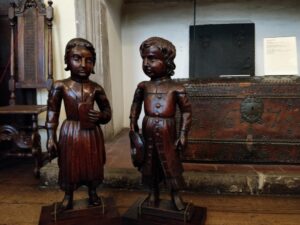 Blue Coat Boy and Girl in the Great Hall

The figures depict a girl holding a book, wearing a distinctive cap and a boy holding a hat in a long coat; both figures have a hand in a pointing gesture.  They are made of pine and have a flattened back, suggesting that they were originally fastened to a larger structure. They are clearly a pair. The date of the sculptures is not known, but the style of clothing makes it likely that they were made before 1800, unless they were made later, deliberately depicting older puritan fashions. It is thought that they were made for a collection box raising funds for a Charity School, called the Blue Coat school, associated with All Saint’s Church in Maidstone.

The Maidstone Blue Coat Charity School was established in 1711 by the Reverend Josiah Woodward and was part of a wider 18th century charitable movement. The name ‘Blue Coat School’ derived from the distinctive uniforms the children wore. Blue cloth was the former dress of servants and became synonymous with almoners and those in receipt of charity.

The school later received legacies and other donations from a variety of sources. An annual charity sermon was established at All Saint’s Church and it is possible that our figures should be seen in this context.

The school was initially located in the High Street, but later moved to Knightrider Street, to the premises which had previously been the Workhouse.

A photo depicts Master A. E.W Bootes in the doorway with the pupils in front and a gentleman in a top hat. Girls and boys are lined up separately in their distinctive uniforms. 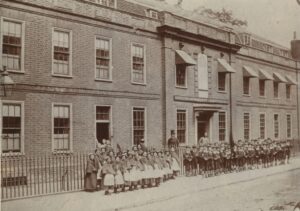 The Bluecoat school in Knightrider Street and students.

By the early 19th century, the school provided for 53 boys and 43 girls. In addition to bible studies, the boys learnt reading, writing and arithmetic, and the girls learnt reading, knitting and sewing.

Two paintings by Jane Day, a local artist, were donated to the Museum in 1894 depicting children in the uniform of the school. Unfortunately, the painting of the boy was never in as good a condition as that of the girl, but is included here for context. 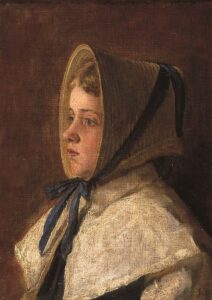 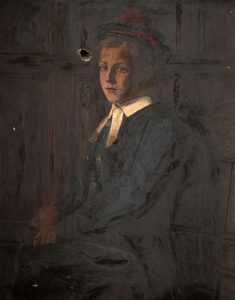 The Blue coat school and its funds were later amalgamated into the Grammar School. The building remained on the site until 1907 when most of the buildings were demolished to make way for the new Baptist Church.

The only surviving part of the workhouse and later school building is the inscription plaque on the front. It commemorates a substantial donation by Thomas Bliss (1647-1721) towards the establishment of the workhouse.  The plaque is now mounted by the stairs as you enter the Ancient Lives Gallery in the Museum. 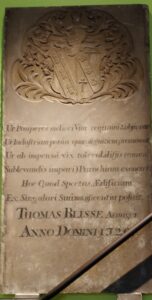 The figures of the Blue Coat School children were located in All Saint’s Church until 1847. They were in a niche on either side of the West Window. At that time, they were painted blue and white in the colours of the uniform of the Blue Coat Charity Schools. Very faint traces of this paint still remain in nooks and crannies of the figures, but these days the figures are the brown colour of natural wood.

It is unclear where the figures were after the re-seating of All Saint’s church in 1847, but they were back again in 1875 and remained in the church until its restoration in 1886. After this they must then have entered the possession of W A E Boots who kindly donated them to the Museum in 1891.

It is wonderful to have the pair back togeher on display again.  Thank you to Marie-Louise Rönsch and Norbert Gutowski from West Dean College of Arts and and Conservation for a sympathetic conservation and a very innovative, unobtrusive, new display plinths.