The Albert Goodwin painting of the Old Bridge, Maidstone is a spectacular example of Goodwin’s work, and represents one of the most impressive pieces held in the Maidstone Museum collection. An outstanding Victorian landscape artist born in Maidstone in 1845, Albert Goodwin trained with the pre-Raphaelite brotherhood, who believed in paintings reflecting ‘truth to life’. 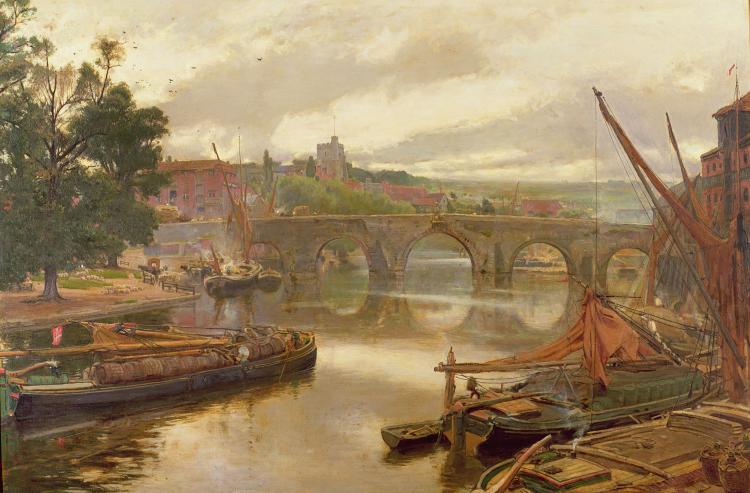 Goodwin was a pupil of Ford Maddox Brown and Arthur Hughes, and also took great inspiration from painting alongside Ruskin: “I owe much thanks to Ruskin, who ballyragged me into a love of form when I was getting too content with colour alone; and colour alone is luxury,” (The Diary of Albert Goodwin, July 18, 1900).

The painting of the Old Bridge at Maidstone, looking south, is of the bridge that spanned the River Medway and was erected during the 14th century. This bridge, adjacent to the Archbishop’s Palace, was probably built by one of the archbishops of Canterbury. It was demolished in 1879 after being deemed unsafe, and later rebuilt by Sir Joseph Bazalgette, a distinguished Victorian engineer.