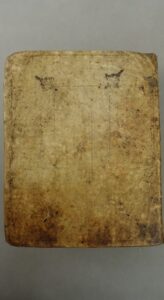 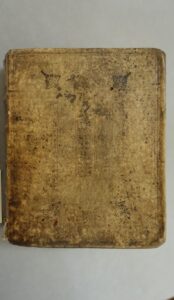 Right board, spine, and left board before treatment. Note the historical paper repair at tail end of the spine.

As part of our book conservation programme at West Dean College, the opportunity was presented to conserve the binding titled Speculum Mundi or a glasse representing the face of the world by John Swan (1605-1671) of the Maidstone Museum Collection. The treatment of the book unveiled a hidden history of the book’s binding as well as a manuscript on the inside of the cover. This blog presents the discoveries made when conserving this 378 year old book.

The volume is a second edition printed by Roger Daniel in 1643 in service of the University of Cambridge. In Speculum Mundi John Swan offers an encyclopaedic presentation of new scientific insights from his time according to the six days of the creation as described in the Bible. Swan discusses and to some extent criticises beliefs and superstitions on the basis of new discoveries made in the field of natural history, such as a fight between a dragon and an elephant and the gift of a unicorn to the Sultan of Mecha from the king of Ethiopia (434-437). The book was first published in 1635 and eventually had four reprints up to 1698. In the eighteenth century the publication lost the interest of the audience and it remained less well known since. Publications of the book are currently preserved in several institutions and it has also been fully digitised.[1] 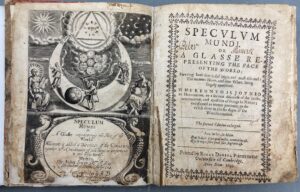 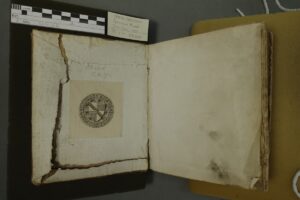 Before treatment, the physical nature and condition of the book could be described as a severely damaged and unstable parchment binding with boards sewn on two alum tawed sewing supports laced only through the boards and fake raised bands. Most of the damage on the textblock was the result from moisture and mould. In addition there were also multiple large lacunae and tears on handling corners, some gatherings were detached, and as result of deformation of the parchment cover the covering material no longer fitted around the textblock. If no treatment would have been conducted, the book would remain inaccessible and the parchment is likely to continue to deform, thereby increasing the already existing small tears.

Multiple conservation treatment options were considered with respect to the intentions of the museum. Of importance was the consideration that the book is part of a museum collection. This means that it will be displayed occasionally, but it will not be consulted frequently by readers. Ultimately, a direction was preferred that displays the binding’s physical history and structural elements by keeping the shrunken cover separate from the textblock.

Carefully lifting the parchment cover from the textblock revealed a hidden manuscript on the inside of the parchment. The manuscript seems to be an old legal document, although a full transcript has not been produced yet. Old parchment was often recycled as covers for books. The material was expensive and as the book printing industry developed to paper instead of parchment, out of use parchment sheets were used for covering material on new books.

Another discovery is the brown residue on the boards, which seems to indicate that the boards were once covered in leather. One of the owners had decided to have the textblock resewn and perhaps also had the cover replaced with its current parchment one. The residue of the leather can still be found on the outside of the boards.

The pattern of the mould damage on the tail end of the textblock and the boards in combination with the old lace holes of the sewing supports on the boards, betray that one of the boards had been flipped upside down when the book was resewn. Since the mould pattern can also be detected on the parchment cover, it seems that would be caused after the rebinding. The mould pattern, however, is not discernible on the wove paper endleaves of the book. 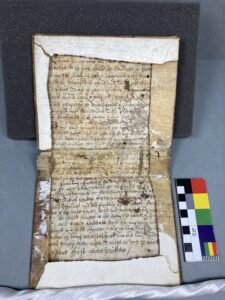 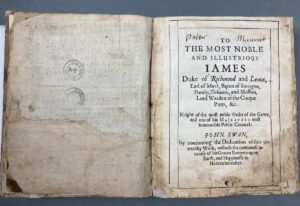 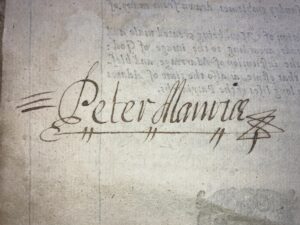 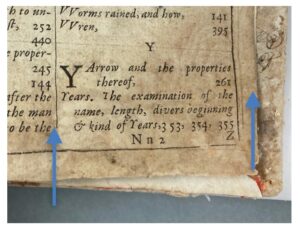 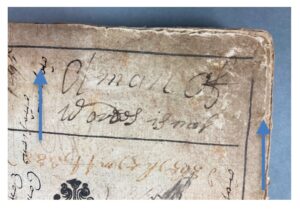 Tear repair on (recto verso side of same page) after treatment

Wove paper was invented by James Whatman in the middle of the eighteenth century. Given that endleaves do not have the mould pattern the text block has, the text block is reasoned to have received most of its damp damage before the endleaves were inserted. Possibly it was Dr. Thomas Charles himself who had the endleaves inserted, for the left paste-down is decorated with his bookplate (pre 1855). The endleaves now partially obscure the annotations that have been made on the inside of the right board and the last page of the book. These notes were possibly made by a Peter Maurice, who really wanted his presence to be known, for he wrote his name in large letters in glitter ink quite large on multiple pages throughout to book. The book has had a rough life, but also was cared for it has multiple not badly executed historical paper repairs on serval locations.

The book is a remarkable object and a relic of the past in terms of its contents, its binding, and the annotations by the various owners. It is a prime example of what the book’s binding construction can teach us about material history and the history of book trade. Now that its treatment has been completed, the book can be exposed once more and display its rich history to the visitors of the Maidstone Museum.