Pernille Richards, Collections Officer at Maidstone Museums, takes a look at some Bracteates from Sarre and Bifrons in this month's blog.
Back to all posts

Object in Focus: Bracteates from Sarre and Bifrons

Bracteates are thin coin-like jewellery pendants made in the period between circa CE 400 to 600 often called the ‘Migration Period’. They have suspension hoops and were worn as part of high-status costumes. Most of these pendants have been found in southern Scandinavia, but they are also found in north-west Germany and England.

The bracteates have been interpreted as amulets and considered significant, as ‘objects of power’ and status. They were inspired by Roman coins and the image of the emperor, but they were adapted to tell stories relevant to the world outside the Roman sphere, many of these have been interpreted to be stories of the Germanic gods, especially Odin/Woden, who was the god associated with rulers. In Scandinavia they are most often found in deposits around new centres of power, one key find location being Gudme on Funen, Denmark.

Where are they found?

In Kent bracteates have mostly been found in graves. On display in Maidstone Museum are bracteates found during the 19th century at two important early medieval (Anglo-Saxon) cemetery sites: Sarre and Bifrons.

A selection of some of the grave goods from Sarre Grave 4, Kent Archaeological Society Collection

In 1863 John Brent, working for the Kent Archaeological Society found a spectacularly wealthy grave at Sarre, Thanet. The person buried was probably a female and died between CE 540 -550.  The grave is known as Sarre grave 4. Many of her grave goods are on display in the gallery including the six gold bracteates which were found between the person’s shoulders. They were probably worn as a necklace.

Bracteates were high status object and struck with a die, like a coin, but on one side only. They have been classified according to their motifs and those in Sarre grave 4 are all the type called ‘D-bracteate’. This type shows a stylized animal, in this case a snake-like animal.  It is so stylized that it looks more like an abstract pattern. Two of these bracteates may have been made from the same die. In addition to several smaller finds the female was buried with beads of amber and glass, a crystal ball, a silver straining spoon with garnets, two disc-brooches with garnets, two small square headed brooches, a Roman coin, a fossil amulet, a glass beaker, and a finger ring. In addition, she had a weaving sword, shears, and keys.

The first sign that the grave was rich was the existence of gold braid surviving from a textile covering the woman’s head, possibly a veil or other type of headdress.

These head coverings were fashionable in Frankia (modern day France and Germany).

Textile working was associated with high statues women and the weaving sword and shears also found in the grave should be seen in this context. 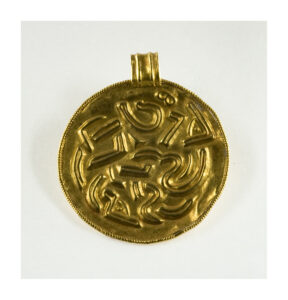 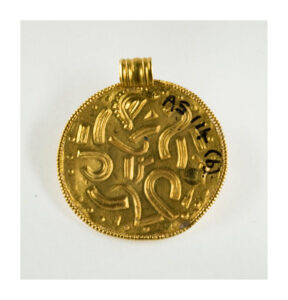 Another site, the cemetery at Bifrons, was located near a Roman road in the Little Stour Valley, southeast of Canterbury. It was excavated by Thomas Godfrey Fausset from the Kent Archaeological Society beginning in 1867. It was published in Archaeologia Cantiana between 1876 and 1880. Bracteates were found in graves 63 and 64 and four were found in grave 29.

These were also found in richly furnished female graves with many of the types of objects that the female from Sarre was buried with, including gold thread and crystal balls and strainers. The full inventory of grave goods was compiled by Sonia Hawkes and edited by E. Cameron and H. Hamerow (see Anglo-Saxon Studies in Archaeology and History vol. 11, 2000).

Grave 29 contained four bracteates originally strung on a necklace (number KAS 514). Amongst these is the only type B bracteate in the Kent Archaeological Society collection at Maidstone. It depicts a human figure with raised hands and legs bent upwards at an angle (see top middle in the photo below). The rest are the snake like animal class D type. Two of them have been identified as possibly made using the same die.

Amongst many other grave goods in grave 63, which include a bucket and a silver gilt square headed brooch, was a 3 cm diameter bracteate found on the chest with beads. It is unusual as it may not have been made by a die but instead made freehand. It is again a class D, abstract animal (KAS 514).

Grave 64 was a double burial, containing a person of unknown sex above with no grave goods and a rich female burial below, again accompanied by silver gilt square-headed brooches, a crystal ball in a silver sling (KAS 312), and a gold bracteate found on her chest. The bracteate is very similar to that found in grave 29 and may be from the same die. It has an engraved ring and dots design (KAS 514). 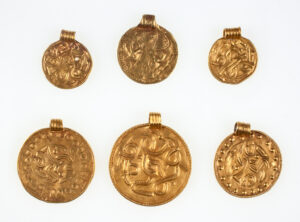 To contextualise these fascinating objects, the post Roman period in which they were used was one of great change. In Britain it is often referred to as the ‘Dark Ages’ because of the scarcity of historical records. The Anglo-Saxon chronicle (ASC) is a later source which was compiled over several centuries. It records the origin myth of the Kentish Kingdom under the entry for the year 449 where Vortigern, King of the Britons, invited the war leaders Hengist and Horsa to help defend against the Picts. They later ousted King Vortigern with back up from new arrivals. The ASC says: “These men came from the three tribes of Germany: from the Old Saxons, from the Angles, from the Jutes. From the Jutes came the Cantaware (that is the inhabitants of Kent), and the Whitware – that is the tribe which now lives on Wight – and that race in Wessex they still call the race of the Jutes.” In 455 a battle between Hengest and Horsa at Aylesford is recorded. Vortigern was defeated and Horsa was killed. Hengest and his son then took over the rule. Similar stories are recorded by the Monk Bede in his famous 8th century work, ‘Ecclesiastical History of the English People’.

Kent as a bracteate hotspot

The number found in Kent is greater than those found in the rest of England and the type D-bracteate dominates. The type and style of the bracteate, along with the design of the suspension loops, are studied to try and puzzle out if they represent groupings of people subscribing to a common identity, perhaps politically and/or through family relationships.

Migration and immigration
A lot of time and energy has been spent trying to link the archaeology from the areas of origin with the archaeology in Kent. There are archaeological links to Scandinavia and Germany in brooch types, the bracteates, and in some types of pottery, but there are no exact matches to find assemblies on the Continent and there are a great many differences. There is a lot of Frankish material and influence, evident in the dress fashions for instance.  A recent study of bracteate types and the links between the dies used to make them, has suggested that many Kentish bracteates were locally produced. The scale of the movement of people is a subject of continuing debate among historians and archaeologists but cultural links were established, and some movement of people took place during this period.

The skeletal material from the Sarre and Bifrons burials does not survive so it is not possible to investigate if the people who wore the bracteates were recent incomers with modern techniques. The bracteates were however a sign of identity and may have been deliberately chosen as an outward signifier of cultural belonging to the Germanic ruling class and their cultural world. It is not possible to know exactly what significance the objects had to those who used them. It has been suggested that they could be a sign that the origin myth later recounted in the Anglo-Saxon Chronicle and by Bede was current in the 6th century.[2] The Kings of Kent traced their decent from Odin/Woden as part of the same origin story. The people who wore the pendants therefore need not have been immigrants themselves but may have been part of the elite who had cultural links to Northern Europe and who furnished their graves in a similar way. The bracteates appear to have been worn predominantly by women and form part of rich funerary assemblages, which contained many similar elements. Later, in the early Christian period, high status women emerge as influential abbesses. Perhaps there was a continuing tradition of women having an important role in elite culture. The occurrence of the bracteates in a wider region may also reflect elite communication and political relationships across this region.