In this November blog, Collections Officer Pernille Richards takes a look at the Minerva Victrix statuette and its fascinating history.
Back to all posts

In 1857 Mr Martin, the owner of Allen’s Farm in Plaxtol, decided to plant hops on his land. His chosen spot was on the side of a hill sloping down towards the river Bourne. Brick and tile fragments had been found in the field during farm work, but no one had thought much of it. During the deep ploughing before the planting, substantial stone foundations of Roman buildings were found and out of the soil came a beautiful bronze statuette of Minerva Victrix. It is just under 19 cm tall and well preserved, showing the goddess in a flowing garment with her foot slightly lifted. 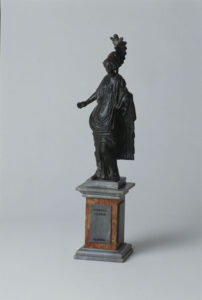 Minerva Victrix, means Minerva goddess of Victory. She was a goddess worshipped by the Romans, linked to wisdom, the arts, war and weather. She became popular during the Late Republic and the notorious Emperor Domitian, who ruled Rome between 81 and 96 CE, was a devotee. He especially admired her qualities for tactical brilliance in battle and he named a legion after her.  She is in many ways similar to the Greek goddess Athena, but she has Italian roots.

Minerva Victrix is often depicted on Roman coins and the little statuette looks very similar to her stance on coins. The stand is modern.

British Museum number 1994.0915.319, Denarius, Minerva standing left with a thunderbolt on the reverse, Obverse, the head of Domitian. © The Trustees of the British Museum.

Shortly after it was found the statuette was exhibited along with an inscribed piece of tile at the Museum in Rochester. Major Luard, a keen member of the Kent Archaeolgical Society,  secured permission to dig at an  Ash plantation very close by the following year and uncovered the remains of a Roman bath house, complete with hypocausts, apsidal rooms, a cold bath, a furnace and an area which is interpreted as a latrine.

It is not known exactly how old the little statuette is because of the way she was found, but she was found with material dating from 43 CE to 409 CE, so she would belong in this time frame. Many of the accompanying finds are from the mid first to second centuries so this may be the most likely date for her.

In the 1980s a Roman Villa was found in Sedgebrook Field close to the bath house which Major Luard had found. It is thought that the bathhouse belonged to this villa.

Research and excavation work led by Malcom Davis between 1999 and 2007 has shown that the buildings were likely to be part of a farm estate. The estate was located in a landscape where there were continuities with trackways and settlements of the Iron Age.

The Roman buildings, such as the bath house with its heated floors, as well as Roman pottery, coinage and the little statuette of Minerva show that there was Roman cultural influence. The statuette is thought to have been imported from Gaul.

Several tiles have also been found stamped with the name of the maker, Cabriabanus.  Tiles by this maker have also been linked to the Roman villa at Darenth and buildings in Bishopgate, London showing other contacts beyond the local area. The site was not that far  from the main road of Watling Street, so geographically well connected.

The evidence from the animal bones and artefacts found suggest that the lifestyle of the people in Plaxtol was in other ways very similar to those of people living in the area during the Iron Age. A burial mound excavated by Major Luard, combining local traditions and a piece of Roman tile, suggests that beliefs may have been a mixture of inherited traditions and new influences.

After going on display in Rochester the Minerva statuette’s whereabouts are little known, but in 1955 she was donated to Maidstone Museums by Miss G M Martin in accordance with the wishes of her uncle, then living in Surrey, but originating in Plaxtol. It is therefore assumed that she stayed in the family and they provided her modern stand.

Minerva Victrix remains much loved by Plaxtol village and her silhouette is used widely in the village, including in the logo of Plaxtol Primary school. The current owner of Allen’s farm continues the tradition of an active interest in the past. It is a village with deep roots, and whoever brought Minerva Victrix to Plaxtol in Roman times would surely be amazed and pleased that she is still  watching over the residents there.

Malcom, Davies, The Evidence of Settlement at Plaxtol in the Late Iron Age and Romano-British Periods, Archaeologia Cantiana, vol. 129, 2009 http://www.kentarchaeology.org.uk/Research/Pub/ArchCant/129-2009/129-13.pdf