Tucked away behind the roaring dinosaur in the Dinosaur and Geology Gallery is a display case showcasing fossilised plants.  Marie Stopes is featured in this display as she studied the coal measures in Kent as part of her career as a palaeobotanist, specialising in coal and fossilised plants.   She wrote extensively in scientific publications and was a leading contributor in her field.  On display is also a specimen of a Cycad like plant , Bennettites allchini, from the Lower Greensand, recognised by Marie Stopes. It is a small connection to a woman who was an influential scientist in her field and an outspoken, often controversial,  campaigner for women’s rights. 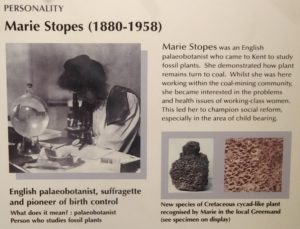 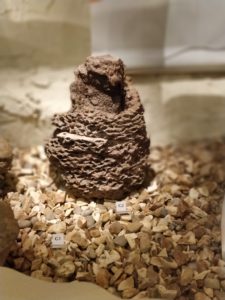 Marie Charlotte Carmichael Stopes  grew up in a well to do family where women’s rights were championed by both her parents. Stopes  studied botany and geology at University College London where she graduated in 1902 with first class honours.  In 1904 she obtained a PhD. In Botany from Munich and was elected a fellow of the Linnaean Society of London.  In the same year she also became the first female academic on the faculty of the University of Manchester.  In 1905 she earned a D.SC degree from University College London at a record-breaking young age. She was very much a trailblazer in an academic environment dominated by men and made significant scholarly contributions.

During her studies she met a Japanese scientist, Kenjiro Fujii, and developed a relationship with him. She obtained funding to go to Japan and spent two years studying in Japan between 1907 and 1909.  She published a book about her experience of living and working in Japan called “ A Journal From Japan: A Daily Record of Life as seen by a Scientist” in 1910 .  Despite her introduction stating that the motivation was a “purely scientific interest in in coal mines and the fossils they often contained”[1]  it is widely assumed that part of her motivation for studying there was to be near Kenjiro Fujii.  The Museum holds a copy of the journal where a very young Marie Stopes looks out from the frontispiece and has signed the book,“ Yours very truly, M. C. Stopes”, in a neat precise handwriting to its owner in 1917. 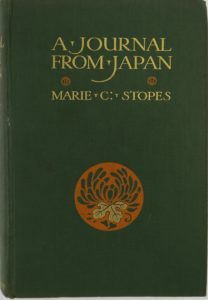 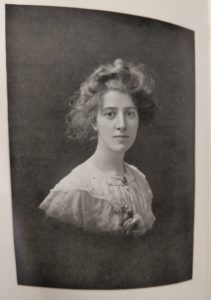 The book gives an interesting insight into her intense and complex personality.  The book starts with a poem to Japan composed by Marie and then details her work in the coal mines and experiences getting to grips with Japanese culture and language. She faced the added complication that she was the only female scientist. She shows an awareness of the difficulties of intercultural communication and is frank about her shortcomings: “ I also tried to  come as close as possible to the Japanese people, although when I look back on my attempts I see how often my impatience with what seemed needless delay, with an unknown code of honour, and with trifling inconveniences in non-essentials, must have acted as a hindrance to free communication with a people so profoundly patient.”[2]   Her intelligence, inquisitiveness and forceful personality leaps from the pages.

Marie Stopes returned to Britain in 1909 and in 1910 she was commissioned to do research in Canada by the Geological Survey of Canada, where she met her first husband, Reginald Ruggles Gates, a Canadian researcher.  The marriage was not a happy one and was later annulled. Stope’s experiences provided inspiration to write a book called “Married Love” which was published in 1918.  It discussed sex and birth control in the context of marriage.  Marie Stopes was ground-breaking in insisting on greater equality between the sexes, a focus on mutual pleasure and the provision of contraception.  She advocated planned parenthood to give women greater ability to live healthy and fulfilling lives.  Her brand of feminism included the private lives of women which was a new departure at the time and her views and writings caused enormous controversy.  Her second husband, Humphrey Verdon Roe , supported her mission and she increasingly devoted her energies to writing on reproductive health, women’s rights and setting up clinics providing access to information and contraception. From around 1935 onwards her scientific work gives way to her focus on campaigning for women’s rights and access to birth control.

These days she is probably best known for her pioneering work in the area of family planning and sexual health and it is widely recognised that this was a force for good giving women more choices and control over their lives.  However, another of her views, has increased in contentiousness over the years and made her legacy more complex.  In line with many prominent thinkers and social reformers of the time Marie Stopes supported Eugenics.  Eugenics is Greek and means ‘well born’.  The term was established by the scientist Sir Francis Galton (1822- 1911)  He was inspired by the ideas of Darwin and argued for an improvement of the human race through selective parenthood.  In the absence of a detailed knowledge of genetics and the importance of environmental influences  the theory gained adherents and was an established branch of science by 1900.   At the time there was an optimistic tenor to the movement in the sense that there was a belief that it would be possible to create a better and happier society free from the suffering of a range of ills from poor health to behaviours deemed damaging to society. However, when policies were developed and applied based on these ideas in Europe and in the United States,  they  led to human rights abuses for instance in the form of enforced sterilisation programmes. The most extreme application of all was developed by the Nationalistic Socialist party in Germany. These days it is therefore quite impossible to read the views of the Eugenics proponents without the chilling knowledge of the eventual consequences of these ideas. The attitude and statements by adherents as expressed in their writings are quite shocking to modern eyes.

Marie Stopes died from breast cancer at her home in Surrey on the 2 of October 1958. She was a remarkable and interesting character. She was extraordinary in her achievements, campaigning zeal and breath of skills if not always wholly likable.  It is tempting to want significant women of history to be  ‘good’. They are to be heroines to inspire us, or they are judged as ‘bad’ examples, to avoid.  During Women’s History Month it is perhaps good to reflect that this this is unrealistic. Real women, historical and current, don’t always fall into neat categories. Marie Stopes dared to break new ground and be controversial. She was a personality it was impossible to ignore.