As a new Iguanodon 50p coin is issued by the Royal Mint, we take a look at the story of Maidstone’s oldest resident – the Maidstone Iguanodon.

The name Iguanodon comes from the Spanish ‘Iguana’ a large South American lizard – and the Greek ‘Odon’ meaning ‘tooth’.

Have you ever noticed that the coat of arms of Maidstone features an iguanodon? 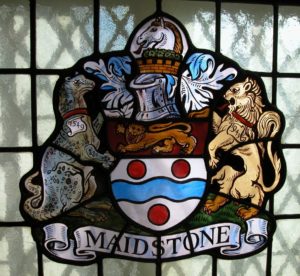 In 1834 during the excavation of a quarry in the Queen’s Road area of Maidstone, a fossil bone was uncovered which appeared to be from an animal of tremendous size. After further investigation by quarry owner Mr W H Bensted, it was found that this bone was one piece of a partial skeleton. 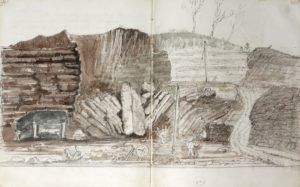 News of the discovery travelled fast and the famous palaeontologist Gideon Mantell hurried to Maidstone. Once at the quarry Mantell was able to confirm that this was indeed the discovery of an Iguanodon. 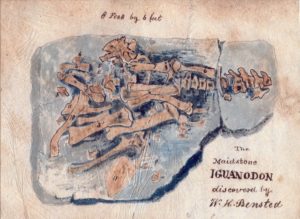 The find was internationally significant as it was the best ‘articulated specimen’ of an Iguanodon found by then, including rib fragments, vertebrae, limb bones, parts of the pelvis as well as, crucially, part of a tooth and a clear impression of another. This helped to work out how the bones of an Iguanodon fitted together. Mantell bought the fossil skeleton from Benstead for the Natural History Museum London for £25, and it is still on display there to this day. A scientific cast of the fossil is on display at Maidstone Museum. 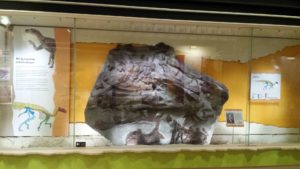 Gideon Mantell (1790 – 1852), the identifier, was a doctor, geologist and palaeontologist. Along with his wife, Mantell named 2 of the first 3 dinosaur species identified in the UK. The Megalosaurus was first identified in 1824 by Buckland, while the Iguanodon was named in 1825 by Mantell and Hylaeosaurus identified in 1833 also by Mantell. However, the term ‘Dinosaur’ was not first used until 1841 at the annual meeting of the British Association for the Advancement of Science. 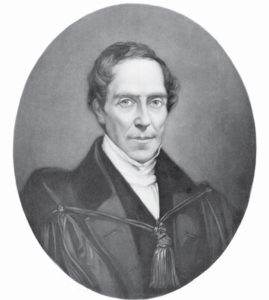 Over a decade before the Maidstone Iguanodon find, in 1822, Gideon Mantell acquired a series of unusual fossil teeth. These could not be identified, but on a visit to the museum of the Royal College of Surgeons in London, Mantell was shown the skeleton of an Iguana.

The teeth of his lizard and his fossils were so similar he was able to persuade his colleagues that he had discovered a gigantic extinct reptile, a revelation in the early stages of modern palaeontology.

This was one of the first dinosaur fossils in the world to be identified and part of a lifelong fascination which Mantell developed with the Iguandon species.

William Harding Bensted (1802-1873) was a local quarry owner and early geologist. In 1834 it was he who uncovered the remains of the Iguanodon atherfieldensis during routine explosions in his ragstone quarry beneath which is now Queen’s Road, Maidstone. As an early geologist he kept detailed notes and drawings of finds from his quarry, and Maidstone Museum holds his original notebook, which also details the finding of the Iguanodon (see images above). After Mantell’s reconstruction of the dinosaur based on the Maidstone specimen, the fossil found great popularity and was nick-named ‘the mantell-piece’. 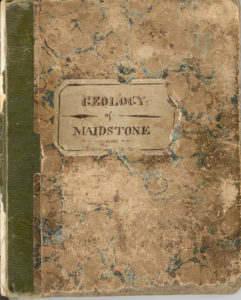 It is now thought that Iguanodons (pronounced – ig-WAHN-oh-don) would have grown to a length of 6-10metres, a height of 2.7metres (to the hip, when walking on 4 legs), and weighed 4-5 tons! 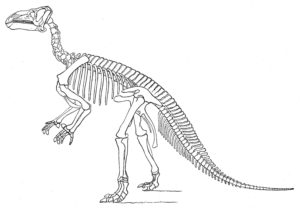 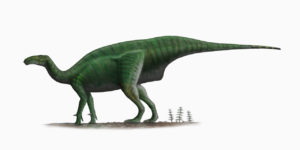 They were reptiles and herbivores (plant eaters), probably eating cycads, conifers and ginkgos, and roamed swampy countryside in Kent, England, Belgium, Germany, North Africa and the USA during the Cretaceous period, 135-125 million years ago.

Being herbivores, Iguanodons had toothless beaks and tightly packed cheek teeth. Their bodies were bulky with legs that were much larger than their arms and a stiff tail. They had 3 toed feet with hoof-like claws, while their front legs had 4 fingers and a hard, conical spike on each thumb, for defence. These were misinterpreted by Bensted, if you see his drawing below, where he believed they were a horn on the end of the dinosaur’s nose. Early palaeontologists believed the dinosaur travelled on two legs, we know believed they moved on all four. 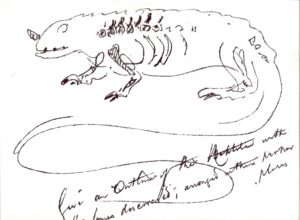 Iguanodon was the second dinosaur that was scientifically named, possibly helped by the finding of teeth and bones by Mrs Mary Ann Mantell (1795-1869), Gideon’s wife, in Sussex. The Maidstone specimen was reclassified in 2012 as cf. Mantellisaurus, part of the Iguanodontian genus by McDonald.

For more information on Maidstone’s oldest resident and the Mantell-piece or Maidstone Slab, you may wish to look at the Natural History Museum, London’s pages on Iguanodon discoveries