Maidstone and its Industrial Past (Part 3)

In the third blog of the series we will briefly look at Maidstone’s papermaking past. Follow the rest of the blog series to find out more about Maidstone’s industrial history . . . . . . 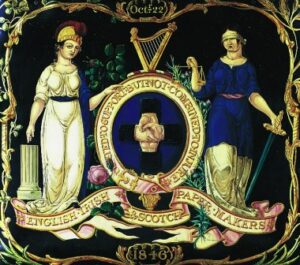 These arms were the original emblem used by the Original Society of Paper Maker’s, one of the earliest trade unions which were formed in 1800 – although the union was active covertly prior to this date. The Society’s headquarters were based in Maidstone which, by this time, was one of the largest papermaking centres in the country. © Maidstone Museums

Maidstone was well positioned for paper making: nearby London both used the paper and produced the old rags from which it was made; the Medway provided transport and clean water (at first – paper production soon polluted it!). The industry developed slowly during the 16th century.  But in the next century many paper mills were established in the Maidstone area, including Sandling Mill in 1671 and Upper Tovil Mill in 1680. 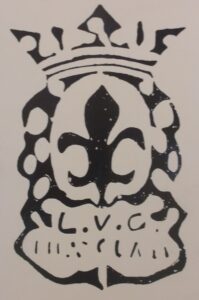 Used to mark the wrapping papers at James Whatman’s Mill. This example reads ‘First Class’, which denotes the paper quality ofr the purpose of levying duty. An Act of Parliament in 1794 divided paper into classes for the purpose of duty, thus the ream stamp can be dates as post 1794. © Maidstone Museums

The 18th century saw a paper making boom, partly due to increased mechanisation, which made production more efficient. The Fourdrinier machine, a moving endless belt of wire or plastic screen that receives a mixture of pulp and water, dominated papermaking from the early 19th century to the end of the 20th. During this period the Whatman family of Turkey Mill (now Turkey Court) developed a reputation for high quality paper, the artist Gainsborough commented: “Upon my honour, I would give a guinea a quire for a dozen quires of it”. While other paper mills such as Hayle Mill also grew. 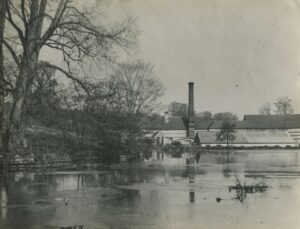 Continued expansion, harsh working condition and long hours were the story of the 19th century. The skilled workers were often paid well, but there were frequent disputes and strikes.  Although trade union activity was outlawed in 1799 and 1801 ‘The Original Society of Papermakers’ managed to resist wage cuts and even win increases. 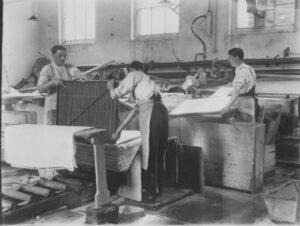 Making paper by hand has changed little from when, according to tradition, it was invented in China in A.D. 105 by Ts’ai Lun (or Cai Lun) and the same principles apply to machine production. The raw material, which could be straw, bark, leaves and for Maidstone at its paper making peak, rags, are put into vats and pounded to break down and separate the fibres.

After they have been cleaned with running water, they are kept in the vat in a water suspension. A wire mesh mould is then dipped into the vat where it is covered in the watery pulp.  The mould is then gently shaken to dispel the water and make the fibres in the pulp knit together. These were often specially designed to give a watermark to papers.

The mould is left for the paper to dry enough to be removed.  The paper is then lifted on to a piece of felt.  This process is repeated to create a ‘Pile’ of paper and felt. The Pile is then pressed a number of times to force out the water and to improve the paper’s surface.

Finally, the paper is dried. 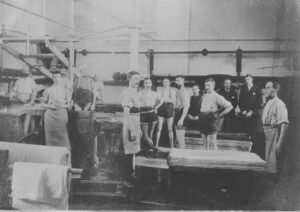 The Whatman name and brand was internationally known for handmade papers, it was the artists paper of choice, Turner himself commented on its quality. James Whatman was born in Loose, Maidstone in 1702. Bby 1733 he purchased land in Hollingbourne and built a paper mill with Richard Harris, known as ‘Old Mill’, in 1736 he expanded and began to rent Turkey Mill. However, it was his son, James Whatman Jnr, who was to become the most prosperous and influential papermaker of the era.

James Whatman Jr, born in 1741, took over his father’s businesses/mills after his death, inheriting 4 mills – Old Mill, Pull Mill, Turkey Mill and Upper Loose Mill. He was an entrepreneur and innovator, using new techniques and types of machinery, developing the largest sheets of paper, known as ‘antiquarian’ size from the 1770s. 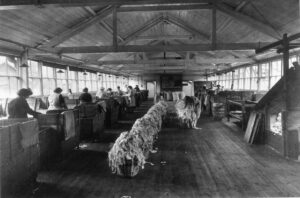 Having no son or heir, Whatman Jr took on William Balston as a protégé, who later bought out the business and the Whatman name with the Hollingworth Brothers (who owned Turkey Mill by this point), forming the Hollingworth-Balston Partnership 1794-1804. In 1805 Balston bought land at Springfield (given its name for the good water supply through springs in the area – essential to the paper making). Here, he built a steam mill in the Whatman name, one of the earliest of its kind, opened in 1807.

However, Balston was heavily in debt for much of his life, so set up the Balston and Co partnership with his wife’s relatives, Bousenquet and Gaussen, as sleeping partners to fund the ventures from 1814. Thirty years later William Balston finally paid off debts but died 5 years later in 1849 leaving the Whatman business to his sons.

Sadly in 1862 Springfield Mill was destroyed by a fire, but was rebuilt. The Balston brothers bought Medway Mill in 1899, expanding their empire and giving them a total of 21 handmade paper vats for a higher level of production. By 1916 there was a move to diversify to make laboratory papers as handmade paper (also known as fine papers) were becoming less popular due to cost compared to machine made paper. Springfield didn’t install its first machine until as late as 1931, but didn’t cease its handmade paper production until 1957. 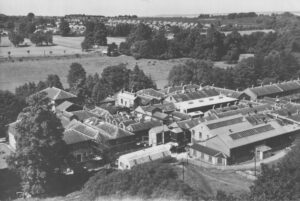 Thought to be 1950’s, around the time it stopped producing handmade paper. © Maidstone Museums

GE Healthcare Life sciences took over the site, making paper products for the science industry such as filters, testing papers, and also food production papers, closing in March 2015, and moving operations to China and Cardiff.

Have you seen the Fourdriner Papermaking Machine model on display in the local history gallery at the collection? It was a 1:18 scale replica of the one used between 1956 and 1984 at Aylesford Paper Mill, which produced paper at a rate of 3 tonnes per hour! 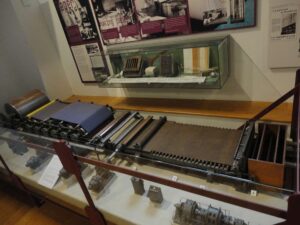 Originally used between 1956 and 1984 at Aylesford Paper Mill, © Maidstone Museums

The Albert E Reed and Co Ltd company was established in 1894 when Albert Reed purchased a mill in Tovil. In 1922 they opened a two-machine paper mill on a new site at Aylesford. The mill expanded considerably during the next forty years, producing mainly packaging papers and newsprint. The raw material was wood pulp from Scandinavia and North America since little pulp was produced in the UK.

With the steep rise in energy prices in the early 1970s British paper mills had difficulty competing with foreign mills which often produced their own pulp. Reed International, as it had become, decided to use waste paper as a raw material. Papermakers had always recycled waste paper, but printed papers were normally used to make lower grades such as cardboard because of the difficulty of removing the ink. Reed invested in a process to remove the ink from recycled newspaper and magazines, thus saving money on imports and helping the environment by removing the requirement to dump thousands of tonnes of used paper every year.

In 1990 the Aylesford site was sold to a Swedish paper company. A new company, Aylesford Newsprint, was formed to produced newsprint from 100% recycled fibre. New machinery was installed for this new process, the PM14 which followed the Fourdinier could produce 280,000 tonnes of ‘Renaissance’ recycled newsprint per year, with the mill in total making around 400,000 tonnes of paper product per year for European and other markets, being one of only 3 mills of its kind in the country at the time. Sadly the site closed in 2016.

Prior to the 19th century, all paper was made by hand. The first machine to make paper in a continuous process was built in Britain in 1803, developed by two brothers named Fourdinier and the basic design is still used today for most paper. The first machine installed in Maidstone was at Lower Tovil Mill in 1822.

The mechanised process was very different to that of handmade paper, as explained above: 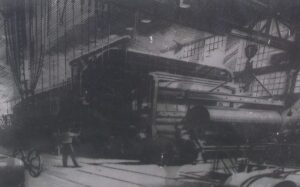 To learn about some of Maidstone’s confectionary and food production past, see our next blog

If you would like to find out more about Maidstone’s papermaking history, you may wish to look at some of these sources of information: