Maidstone and its Industrial Past (Part 1)

This first blog in the series will briefly cover the development of Maidstone as a central town, and Maidstone Market. Follow the rest of the blog series to find out more about its industrial history . . . . . .

Maidstone at the Centre

“…the great centre-point of Kent…the finest town on the Medway, a . . . .  hive of life . . . Maidstone draws all Kent to it.” (from The History of Maidstone, The Making of a Modern County)

With its river, road and rail routes to London and the Continent, Maidstone became the County Town of Kent; the business, market, social, shopping, medical and judicial centre for the region. Maidstone’s history really begins in the medieval period, when the Archbishops’ Palace, overlooking the River Medway, became the focus of small-scale development with markets and fairs. The River Medway that divides Men of Kent (North and East of the river) from Kentish Men (South and West) has provided water, power and transport throughout the town’s history and is the reason why Maidstone developed as a town. 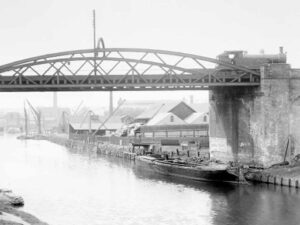 Locomotive crossing the high-level railway bridge, Maidstone, c.1920
Looking at the riverside today with its expensive apartments and pleasant walks it is easy to forget that at the beginning of the twentieth century it was a bustling industrial and commercial centre. © Maidstone Museums

Maidstone began to boom as an industrial and society town in the 18th century, with principal trades including brewing and paper making and in its hayday, Maidstone supplied London with “more particulars than from any single market town in England.” The coming of train links in the 19th century also meant easier commuting for workers, as well as transportation of good and materials. 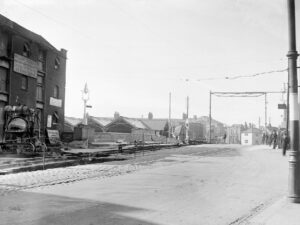 Lower part of Maidstone High Street and Bridge, c.1920s
This photograph is a real reminder of the industrial nature of Maidstone’s water frontage. On the far side of the bridge are warehouses, while on the near side is Bridge Wharf Mills which belonged to corn merchants William Taylor &Co. The mill is now a ring road and the warehouse law courts. © Maidstone Museums

However, the economy has changed over the years from predominantly heavy industry to the light industry and increased service industries. But that doesn’t make those industries that are either no longer here or condensed any less important. Maidstone remains the administrative centre of Kent in the 21st century but has expanded as a retail centre, as well as developing its social side, particularly with its bars and clubs. 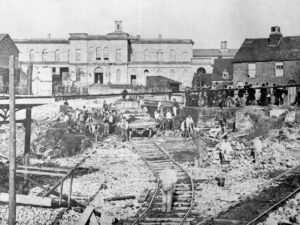 Maidstone has always been a market town, its river and later rail links made it easy to transport goods to and from the town for selling and buying. In 1261, Maidstone gained a grant for markets every Thursday at Peter’s Field, then moving to the High Street. In the 1720s, Daniel Defoe declared Maidstone market the best in England, with a wide variety of goods going to London including bullocks, timber, corn, hops, paving stones, sand and apples. 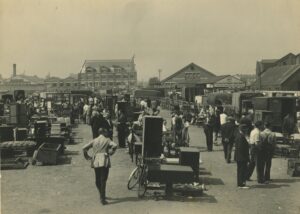 Lockmeadow Market, c.1947 © Maidstone Museums
By the 19th century, Maidstone also supplied agricultural machinery, seed and sundries of the hop and fruit trade. In 1892 Lockmeadow was purchased to hold livestock fairs, and the market diversified by the 1940s to include motor vehicles, garden produce and general goods. 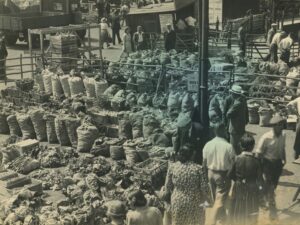 To learn about some of Maidstone Hop picking and Brewing History, see our next blog

If you would like to find out more about Maidstone’s beginnings as a market town, you may wish to look at some of these sources of information: