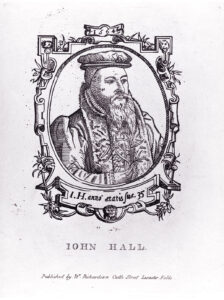 Engraving of John Hall, Surgeon, 1564, from the Smythe collection vol 7

John Halle, or John Hall of Maidstone, was a surgeon in Maidstone during the 16th Century and a recognised poet. Today he is largely forgotten. There seems to be virtually no traces of his presence left in Maidstone, but at the time he was influential in his advocacy for improvements in surgery along with a Maidstone man from the earlier generation, Thomas Vicary, who became the King’s surgeon to Henry VIII. He was also a published poet and keenly interested in religious subjects as well as a commentator on contemporary habits. In 1566 he published a volume called: ‘The Court of Virtue containing many Holy or Speretual Songs, Sonnettes, Psalmes, Ballets and Short Sentences as well of Holy Scripture as others with Music Notes.”  His poetic works are said to have been influenced by the diplomat and poet at Henry VII’s court, Thomas Wyatt the Elder (1503-1542) who was born at Allington Castle near Maidstone and is credited with popularising the sonnet. 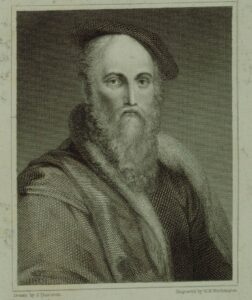 John Halle was well educated, probably at Kings School Canterbury but, possibly due to his protestant convictions, did not attend university, unlike his catholic leaning younger brother Thomas who studied medicine at Oxford and was subsequently surgeon-physician to St.Thomas’ Hospital. John Halle was a member of the Company of Barbers of London, and later the Company of Barber Surgeons, eventually achieving the honour of the title Master of Surgery. The Company of Barber Surgeons was a medieval craft guild working under the aegis of the town council which controlled entry into the craft. They supervised apprenticeships and maintained standards of practice.

During his apprenticeship to London Surgeon John Bankes John Halle spent some time in prison in Maidstone for supporting the uprising commonly known as the Wyatt rebellion. The uprising originated in the opposition to the marriage of Queen Mary to the Catholic King Philip of Spain and the fear of Catholic influence. Thomas Wyatt the Younger (1521? – 1554), the son of Wyatt the Elder and Elizabeth Brook, was the leader of the failed rebellion in Kent in 1554. We can gather from his participation that John Halle was firmly in favour of the Protestant cause. He was later released but not pardoned and continued to complete his seven-year apprenticeship before returning to practice in Maidstone. In his early days in Maidstone he was not readily accepted by the local community partly due to a tardiness in his adjustment from the style of a London to a provincial practice. London was a greater seat of wealth and culture than the provincial town of Maidstone. The practices in London tended to be small, but earn lucrative fees, and in London surgeons were allowed to collaborate on a case-by-case basis and share the fee, but only with fellow members of the Company of Surgeons, this practice would exclude locally trained surgeons in Maidstone. The fees he charged are also likely to have been higher than the fees of locals. During this time, he wrote his work aiming to expose the risks of dependence on the ministrations of unqualified and often deceitful practitioners. It was called: ‘A Historical Expostulation against the Beastlye Abusers both of Chyrurgerie and Physik in ours Times’. This included a section on the locally born itinerant surgeon/physician/astrologer/palmister and soothsayer called Thomas Lufkyn, initially a fuller by trade from Fulling Mills at Grove in the parish of Boxley.

John Halle’s writing challenged some of the accepted medical theories of the time, and this did not always sit well with members of the College of Physicians. The writings also attracted the attention of Government and Church. The register of the Company of Stationers of London indicates that his book ‘Anatomie’ was referred for approval to the bishop of London before publication, a very unusual procedure for a medical book of the time. In addition, medical writers would have been familiar with the fate of the continental physician Michael Servetus who was condemned to death as a heretic following publication of his theory on the circulation of the blood between the heart and lungs, although Servetus’ ideas on religion may have contributed to his ill favour. Halle’s medical publications were forward thinking and innovative but to avoid controversy he sometimes disguised them as new translations of earlier continental works. Because of this his invaluable contribution to medical science and practice has never been fully appreciated.

None of his book survive in the Maidstone collection, but some are preserved in Medical Libraries, such as this copy in the Wellcome Collection of his translation of Lanfranke’s Briefe of Chirurgerie, published in London in 1565 by T Marsh. It has been digitised and can be read online. 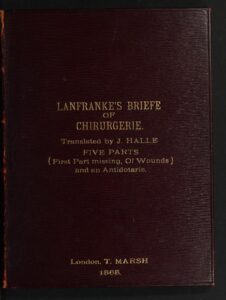 Front Page of John Hall’s translation of Lanfranke’s Briefe of Chirurgerie from the Wellcome Collection https://wellcomelibrary.org/item/b30328342

John Halle took on his younger brother Thomas as his apprentice when Thomas was about 13 years of age. Thomas received his qualifying diploma from the Company of Barber Surgeons in 1565.   Shortly after that The Barber Surgeons, in an attempt to unite the profession, had decided to fund one scholarship a year to Oxford and one to Cambridge for a barber surgeon to study for a medical degree. The first of these was awarded to Thomas Halle to study at Oxford. He achieved his doctorate in medicine and subsequently a fellowship of the Royal College of Physicians so eventually becoming the first practitioner to have undergone formal training and qualification in both medicine and surgery. His clinical appointment was at St. Thomas’ Hospital, London. Unfortunately, this system did not become common practice at that time, the Company of Barber Surgeons scholarships became diverted towards studies other than in medicine, and the disunity within the profession continued.

John Halle probably served for a short time as an army surgeon in a force recruited at the request of Queen Mary to support Philip of Spain in his battle against the French in Spanish Flanders. This might explain why at the end of the war he was finally formally pardoned in June 1558, together with 244 other men of Kent, for his part in the Wyatt rebellion and was at last again a free man.

John Halle leased a house with a garden of medicinal plants at the corner of Tovil Lane and Stone Street in Maidstone and was a parishioner of All Saints’ church where there is an entry in the church register noting his death in 1568. He is buried in the churchyard but no physical evidence as to where now exists. 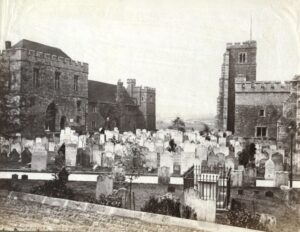 Fielding C, 2018.  John Halle of Maidstone: Radical Poet, Anatomist and Surgeon in Tudor England. A copy can be found at the Wellcome Collection: https://wellcomecollection.org/works/qmwujbvz

Halle J, The Historical Expostulation Against the Beastlye Abusers of both Chyrurgerie and Physik in Ours Time. Pp8-11 https://wellcomecollection.org/works/xgs8tscw

Lanfranco; Hall, John, A most excellent and learned woorke of chirurgerie, called Chirurgia parva Lanfranci, Lanfranke of Mylayne his briefe: reduced from dyvers translations to our vulgar or usuall frase, Published by Thomas Marshe, London 1565 https://wellcomelibrary.org/item/b30328342

Further reading on the Barber-Surgeons Guild: Margaret Pelling of the Wellcome Unit for the History of Medicine, University of Oxford,” ‘Barber-Surgeons’ Guilds and Ordinances in Early Modern British Towns.”