History on our doorstep

History on our doorstep – a walk in Headcorn

While staying local continues to remain important, you might enjoy taking a fresh look at your local area. You will be amazed how much history you will discover on your doorstep.

In this blog you’ll join the Collections Officer on a brief look at a couple of highlights from Headcorn, a historic village in the Weald within Maidstone Borough. It is just south east of Maidstone on the A274. This little exploration is using photos from the Museum’s collection from the beginning of the 20th Century and re-visiting the locations. If you feel inspired then we would love to see your favourite historic spot on our Facebook, Instagram and Twitter pages with the hashtag #HistoryOnOurDoorstep. 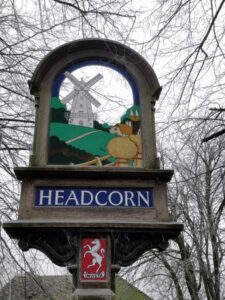 Headcorn was first mentioned in the 8th century charters of King Wittred and King Offa and was well established by the 12th Century. Just south east of Maidstone on the A274, the village sign, situated on the village green, is one of the first things you see as you arrive in Headcorn. The village sign and the logo of the local primary school both have a windmill as their symbol. There used to be four mills in Headcorn serving the local area, but none of them remain. The mills most people remember are the two to the north called White Mill (TQ 84 SW 255) and Black Mill. The black mill was a smock mill, that is the traditional type of windmill with a six or eight sided tower and a roof or cap that rotates to bring the sails into the wind, just like it is represented on the village sign. Black Mill was built in the 1760s and later had a steam mill installed alongside it in 1846. It was no longer working in 1890 and was torn down in 1910. The White Mill was also a smock mill. Built in 1819, it continued working until the 1930s, where it was advertised as a working mill for sale in 1937. It was eventually demolished in 1952. 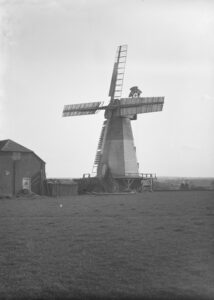 No photograph in the collection is securely identified as the Black Mill, but the White Mill on Millbank was photographed around 1920 and is in the Marley collection of photographic negatives. Marley was a member of the Maidstone Camera club in the early decades of the twentieth century and left a large number of negatives to the museum depicting local scenes. 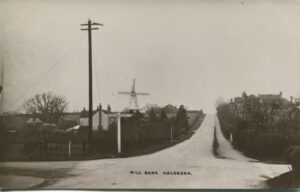 Postcard by an unknown maker of the Mill and a view of Mill Bank looking North towards Maidstone.

The mill was situated on the higher ground towards the north of Headcorn. It is not known exactly when the above photograph used for the postcard of Millbank was taken, but it must have been early in the 20th Century. The local economy was largely agricultural then, although the railway had arrived in 1842 and brought new economic development to the area. Many of the houses in the photograph can still be recognised when walking this area, although they can no longer be seen from the junction because of the vegetation growth over the years. The trees and bushes also hide the many new houses built along the road over the years and the junction has recently become light controlled. 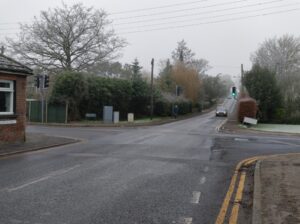 The road to Maidstone is very straight. It was built by French prisoners of war early in the 19th Century, until then the main road went up around the church and along Gooseneck Lane. The Church is one of the most prominent and oldest buildings in the village. SS Peter & Paul is a grade 1 listed building with enough history to keep you exploring for hours. Parts of the Chancel are thought to date back to the 11th and 12th Century, most of the church dates from the later Middle Ages, when the area was prosperous from the wool trade. The nave and tower are late 14th Century, the aisle porch and roof are early 15th Century. Like most churches it was restored in the Victorian era in 1868 and 1878. The prominent Kent family of the Culpepers are associated with the church and the wood used in the roof may come from their estate at Bedgebury. The roof is beautiful, like a great upturned wooden boat soaring above you. The term nave comes from the Latin word for “ship” navis and this seems particularly apt where you have a great wooden roof structure in a church. 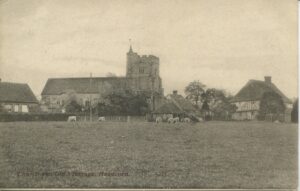 Postcard of Headcorn Church and the Old Vicarage

An early postcard shows the Church (TQ 84 SW 2) and the timber framed building which was once a Parsonage. The photo has been taken from the field and Gooseneck Lane is to the left in the image. The old Parsonage (TQ 84 SW163) is a Tudor Wealden House built after 1516 as a parsonage. It is now more commonly known as Headcorn Manor. It is a handsome and interesting house of its type and is now a well restored private residence. The field is perhaps a little smaller, but sheep are still grazed there from time to time. The modern image of this area had to be taken from Church walk as the area around Headcorn Manor is not accessible to the public. 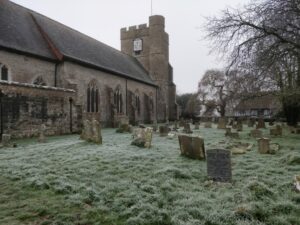 On the other side of the church, just south of the porch, are the sad remains of what was Headcorn’s most long-lived resident. It was once one of its most loved inhabitants too, although the memory is now fading. A great oak once stood here, possibly a survivor from when the area was covered in a large forest called the Andred. Headcorn may derive its origin as a clearing in this forest. The tree had a massive girth and amongst the many stories accumulated around the tree was that King John (1199 -1216) watched bull baiting from under its shade. 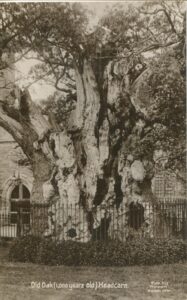 The oak was damaged by fire in 1989 but continued to produce new growth until 1993. It is now dead with its few decaying remains covered in ivy. There is a plaque explaining its history by the path alongside it. 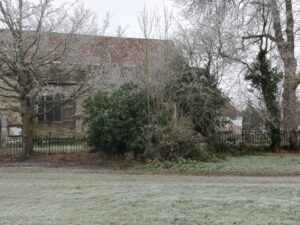 Looking toward the overgrown remains of the great oak 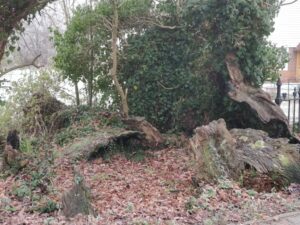 Remains of the great oak

The remains can be a little difficult to spot during the summer when they are covered in vegetation. An oak tree west of the remains of the great oak was raised from one of its acorns and planted in 1940. It is now a very decent size, but not yet as impressive as its parent. A row of chestnuts lines the path from the Church to the High Street, these were planted to celebrate Queen Victoria’s Diamond Jubilee.

As you walk down the path towards the High Street you will see the row of cottages by Church Walk and at the far end by the road an old building. 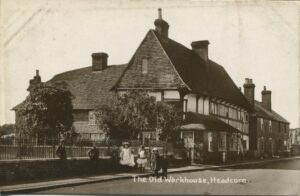 This impressive old building dates from the late 15th or early 16th century. In the postcard above it is called ‘The Old Workhouse’, it is also known as ‘The Cloth Hall’ (TQ84SW10). It has had a number of different uses over the years but seems to have originated as a cloth hall. Headcorn and other areas in the weald had a thriving cloth industry during the late 15th century to the mid-17th Century. Wealthy clothiers built substantial houses for their trade. Different types of cloth were produced, a heavy high quality Wealden broadcloth, which was often sold to London and further on to markets abroad, including Germany, and cheaper lighter cloths, such as Kerseys. The latter cloths were mostly sold in local urban centres like Maidstone. Many people were employed as spinners and weavers. The Cloth Hall may have been used by members of the guild to store and inspect cloth. In recent times it has been a shop and has become a private residence. 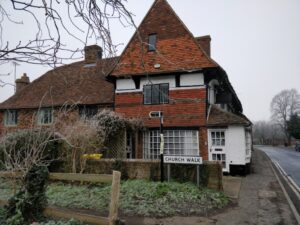 It is thought that a master weaver lived in another property along the High Street, the impressive Shakespeare House (TQ 84 SW 164). The house is Tudor, dating from the late 16th Century and was originally also involved in the cloth production. 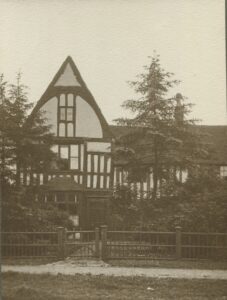 It is not known why it was called Shakespeare House, but it drew the attention of antiquarians early on. The image above was taken by Mr F J Argles from the Maidstone Camera Club as part of the Photographic Record and Survey of Kent. The photographic survey took place between 1902 and 1930. The path leading from the house to the street is made of Bethersden Marble. 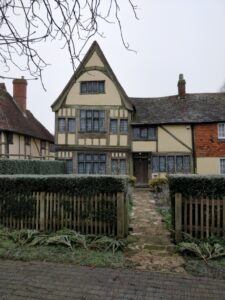 Just along from Shakespeare House and not present in the images we have by Marley and F J Argles is the Village War Memorial, where those from Headcorn who lost their lives during the First and Second World War are remembered. You might like to pause here for a while and read their names. 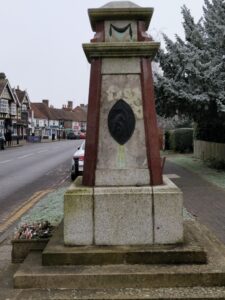 The War Memorial in Headcorn.

The walk down Headcorn High Street has not even really started yet, there are a lot of other interesting sites and houses which could be visited, but just in these few locations we have gone from the Middle Ages to the 20th Century.

Have fun seeing what you can discover in your neighbourhood. All the Museum’s topographical images are available to view on the Kent Photo Archive website along with lots of other interesting collections. Remember that current names for buildings and roads can give you a clue to the history of the place even if everything you see looks modern. Long disappeared farms and businesses may survive in street names.

If you feel inspired to look for history in your local area there is a list of useful resources below.

Websites with information and images:

In addition, the following were consulted: