Something very unusual is sometimes described as ‘rare as hen’s teeth’ because, as we all know, birds don’t have teeth. That was not always the case, because some 150 million years ago birds, descended as they were from dinosaurs, did have teeth. After the meteorite that extinguished the dinosaurs, birds survived and continued to evolve. Bird fossils are not common, so I was very excited to find a piece of jawbone from a bird while collecting at Sheppey. How did I know it was bird?  Birds fly, and therefore need to be as light as possible. They also need a lot of energy, and that necessitates big lungs. Our lungs take in air containing oxygen and exhale it with less oxygen and more carbon dioxide. Most of the air remains in the lungs, as it is impossible to empty them. The oxygen is put into the blood at the very end of the minute tubes, of which the lungs are composed. It is only the mixing of the fresh air on the way down, which gets any oxygen to where it is needed.

This is a very inefficient system, but it is what evolution has supplied. Birds have a slightly different system, which is far more efficient. Past the ‘oxygen exchange’ department are more tubes leading to air sacs in the body.

When breathing in, almost all the fresh air reaches the ‘oxygen exchange’ department. Some dinosaurs which preceded birds may have had a similar system, but we have little fossil evidence. Birds have evolved this design further, by housing the air sacs inside their bones and so decreasing their weight. So, as my jawbone was hollow, this was evidence that I had a bird bone.

But there was more. This jawbone had what appeared to be some sort of tooth. A bird with teeth! As the ‘tooth’ is made entirely of bone it is not a true tooth, which contains dentine and enamel. Several bony-toothed birds are known from Sheppey and are considered to be fish eaters. One of the earliest to be identified and named, is Odontopteryx toliapica. They lived 48 million years ago and there is a skull on display in Maidstone Museum. 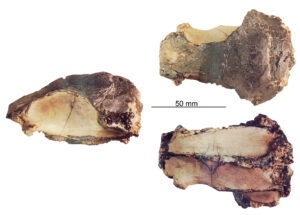 I was convinced that I would not find a better fossil that day, but continued. Fossil collecting at Sheppey requires no tools, just a stoop and good eyes. As I continued, I saw a turtle shell just laying in the mud. Turtle fossils are only slightly more common than birds and still very rare. It was complete top and bottom but without head or legs. It went into my bag, carefully wrapped, along with the bony-toothed bird jaw. And I continued. A short distance further, and I noticed a piece of corrugated asbestos, dumped on the cliff top, and now washed onto the beach. Not much I could do about it, but I walked across, and jumped on it. Looking down, to see what effect I had had, none, 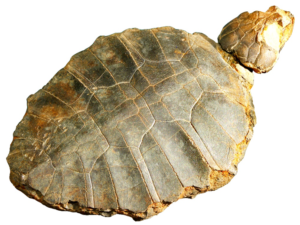 saying ‘please pick me up’ was a turtle skull. Bird jaw, turtle skull and carapace! hen’s teeth were sprouting everywhere.

Well, actually, I found nothing else of note. Back home and the only work needed was washing off the mud and removing any salt that may have infiltrated the specimens. As they must have washed out of the cliff within the last few days, they were probably fairly salt free. The skull would look nice on the body, so I put them together. They fitted, moreover the skull actually clicked into place against the top vertebra. They were together 48 million years ago and were at last together again. My specimen of Puppigerus camperi, the only known one from Sheppey with both skull and carapace, is on loan to Maidstone Museum and can be seen with the bird skull in the first fossil cabinet, Swimming with Beasts.

For more information on the fossils of Sheppey see: