George Baxter: The Picture Printer of the 19th Century

George Baxter was the pioneer of English colour printing. Since the 1500s, numerous people had experimented with the development of colour printing. While progress was made, most prints continued to either be monochrome or hand coloured, a process which would last into the late 1820s. By bringing together various printing methods, Baxter was able to turn a labour intensive and thus expensive process into an effective and relatively cheap way of making coloured prints. Through this ingenuity, Baxter was able to bring this art form to the masses.

Maidstone Museum holds around 600 prints made using the George Baxter printing process, making it an almost complete collection of his works. This collection includes; books, prints and works by licensees, we even hold a number of the original printing block and plates! Within this, 343 prints and 51 books were donated by one person in 1919, Lady Bearsted (Fanny Elizabeth Samuel). Lady Bearsted was a member of the philanthropic Samuel Family of Mote House, Maidstone. Her husband, Lord Bearsted (Marcus Samuel) was founder of the Shell Transport and Trading Company, and in 1924 he donated funds to the museum to build the ‘Bearsted Wing’, to house the Baxter print collection in an upper gallery, and their son’s, Walter Samuel’s, Japanese fine art collection in a lower gallery. The prints remained on display for some 80 years.  The prolonged display is not ideal for the conservation of works on paper, and the prints are currently ‘resting’ in store to preserve them for the future by reducing their exposure to light. 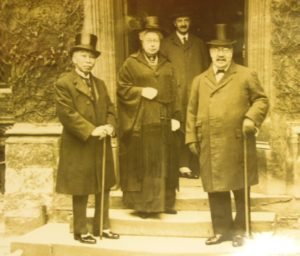 Opening of the Lady Bearsted Wing, 1st May 1925. Lord Bearsted on the left, Lady Bearsted in the centre, their son Walter Samuel at the back, and the Japanese Ambassador on the right.

George Baxter was the second son of the printer and publisher John Baxter, and was born in Lewes on 31st July 1804. After private education there, he joined his father’s business in Brighton but subsequently returned to Lewes where he studied drawing and sketching, making his first attempts at engraving on wood. He was next apprenticed, at his own request to a wood engraver in London and soon made such progress in the art that he adopted it as his profession. 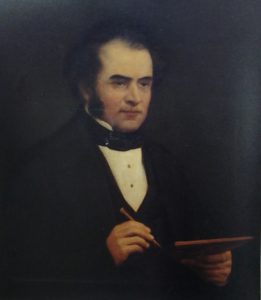 In 1827 he married Mary, daughter of his father’s old friend Robert Harrild, also connected with the printing trade, finally settling in London where he lived for the rest of his life. His father-in-law had previously experimented, without success, in colour printing, but George Baxter commenced working in the same direction. In or about 1830 he published his first print in colours, “Butterflies,” which was printed from seven wood blocks, each block carrying a different colour or tint. 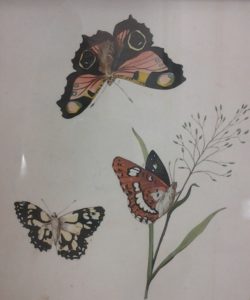 Butterflies
Number 1(1)
1829
This print was probably for a book illustration, but no book has yet been found including it.  Under the print I type in one line is “1. Peacock 2. Marmoress 3.White Admiralable.  Engraved on wood and printed in colours, by G.Baxter, 29 King Square, Goswell Rd.”  This is Baxter’s first known print in colours.

After further experiments he commenced in 1834 the frontispiece illustrations to Robert Mudie’s books on Natural History, several of which are included in the collection: other plates followed in rapid succession, with progressive improvement in artistic skill and technique of execution. A little later Baxter used steel for his foundation plates and obtained the first impression of his subject in the form of a mezzotint, the subsequent impressions being printed in oil-colours from wood blocks, a separate block being used for each colour. 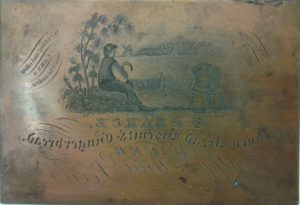 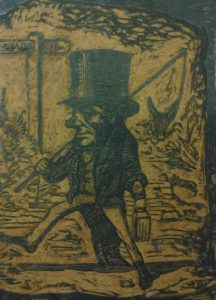 Baxter’s work began to attract much attention in the printing world and by 1836 a vogue had arisen for illustrated books of poems and short stories. Chapman and Hall commissioned Baxter to produce the pictures for a deluxe volume to catch the Christmas trade entitled Cabinet of Paintings. Baxter saw this as his great opportunity.  The book ranks as one of the rare items of book production, being the first produced in Great Britain entirely illustrated with pictures printed in colour. 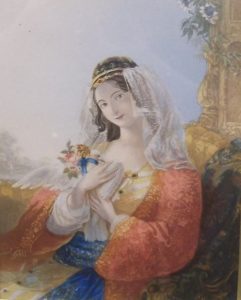 The Carrier Pigeon
Number 46(41)
1837
Number 3 in the Cabinet of Paintings, this was used as the frontispiece. 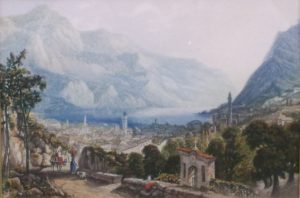 Lugano
Number 49(44)
1837
A view of the lake and the town painted by G.Barnard and used by Baxter for Number 6 in his Cabinet of Paintings.

Baxter himself tinted the paper for these plates, using a smooth letterpress method.  He also evolved the idea of printing the complete picture in monotone and then colouring it by successive applications of small wood cut blocks, each one a different colour, as an artist building up his work.  The result was a facsimile picture. 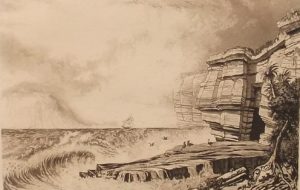 Unhappily, his search for perfection was to be his undoing.  His experiments with tinted paper and various forms of colour printing took so long that the publishing date could not be met.

The prints of “The Coronation of Queen Victoria,” and “The Opening of the First Parliament,” published in 1841, were each printed from probably thirty or more blocks on the top of the impression from the foundation plate, and are good examples of the state of perfection to which Baxter had, at that time, carried his process. His biographer, Mr. C.T. Courtney Lewis, writes: “His later prints are distinguished for their elaborate detail, perfect register, brilliancy, and depth of colour, life, and the softness and the delicacy of their finish; no one has ever quite equalled him in these qualities”. 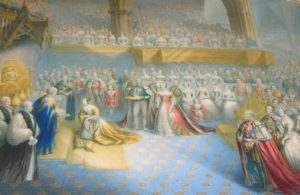 Baxter continued working until 1860, when he gave up business, and his plates were dispersed; some were obtained by other printers, including his late assistant Abraham Le Blond, but they all failed to produce prints with the high degree of finish that Baxter obtained. In fact, the exact secrets of his process died with the man, as he imparted it to no one, and did not allow anyone to witness the final printing from a plate. 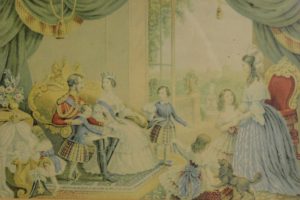 The Royal Family at Buckingham Palace
Number: LB(CL 69)
1851
Through the window can be seen Westminster Abbey and other London Buildings. Queen Victoria and Prince Albert are seated and seven of the royal children are around them. Signed Le Blond & Co Licensee.

Genuine Baxter Prints, which were originally published for a few pence, are now as much in pounds, and in some instances considerably more, with a still rising value.

Baxter died at his residence, “The Retreat,” Sydenham, on 11th January 1867, from the results of an omnibus accident in London, and was buried at Christ Church, Forest Hill. 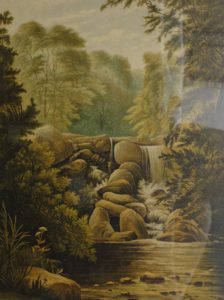 In 1856 Robert Le Blond emigrated to America and attempted to import and sell their Baxter process prints, but had to combine with Elliot & Co. of Boston in order to do this. On returning to England in 1862, he sold the distribution rights to Elliot.

Le Blond’s most famous prints are the ovals, a set of 32 prints onto the centre of an oval embossed mount, unlike Baxter prints, which were cut out and stuck onto the mount. Another popular series was “lonely maidens”, in which scantily-clad but inoffensive, romanticised Victorian ladies appealed to the popular market. Le Blond’s small landscapes came nearest to Baxter’s work, and were well produced. 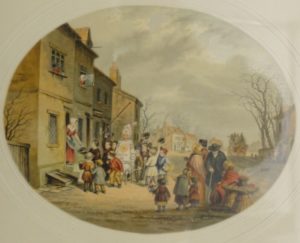 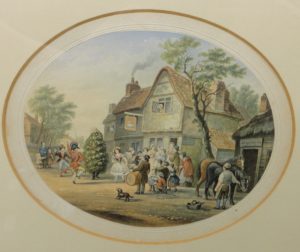 May Day (Number: LB85(101) and The 5th of November (Number: LB86(CL102).
Signed Le Blond & Co Licensee From the charming set of thirty-two oval pictures, all of the same size, produced by Le Blond & Co. They present a nostalgic picture of rural village life in England in the early part of the nineteenth century. There is no acknowledgment of them being taken from any artists’ pictures.

In 1868, the year after Baxter’s death, Le Blond bought the 66 sets of Baxter’s original printing plates and blocks from Vincent Brooks Day & Co. Undoubtedly some of them were worn, rusty, missing or cracked, and this affected the quality of the print Le Blond was able to produce from them. In any case he was more of a practical business man, and in order to feed his market, was quite happy to take short cuts and sacrifice technical perfection. Baxter’s obsession with the craftsmanship side of his work had contributed in no small way to his financial failure.

The re-issued ‘Le Blond Baxters’ did not have Baxter’s name, as Le Blond erased it and substituted his own. Later in the Baxter boom of the 1920s, unscrupulous dealers would cut Le Blond’s name off and used Baxter’s forged Baxter mounts to deceive the unwary collector. LeBlond also used plain card mounts without an embossed seal – he never intended, in any way, to pass off his reprints as the “genuine” article.

Le Blond produced only two needlebox sets – but in hundreds of thousands – the ‘Fancy Set’ and the ‘Regal Set’. Production of the Le Blond Baxters ended about 1870, the business going bankrupt in 1894, when the goodwill was purchased by Barclay and Fry. 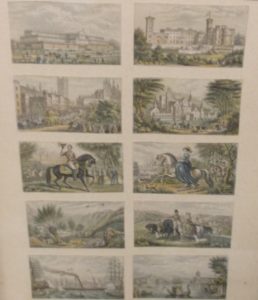 Regal set Needle-box prints
Number: LB(CL74)
In the early 1850s it was, customary for ladies to purchase their needles in small boxes, on the outside of which was a print of about the size of 6 inches by 4 inches. Inside the box were numerous smaller boxes, containing needles of various sizes and on the cover of the smaller boxes was a ‘needle-box’ print. Baxter printed a good many of these prints, and also a good many of the needle-box sets. Baxter was probably the originator of these, coloured needle-prints, and, as in other things, Le Blond copied him. Both these colour printers published them in sets. Baxter, besides using them for needle-boxes, put some of his on stamped mounts.

Baxter invented his ground-breaking printing methods to bring art to the masses. He said himself of his prints, “while their artistic beauty may procure for them a place in the Royal palaces throughout Europe, the prices at which they are retailed introduces them to the humblest cottages”. His collections can be found in many private collections as well as museums, galleries and libraries across the UK, USA and Canada, including the V&A, Fogg Museum (Harvard), EJ Pratt Library (Victoria University, Toronto) . . . . . and Maidstone Museum!

Courtney Lewis, CT. The Le Blond Book: Being a History and detailed Catalogue of the Work of Le Blond and Co by the Baxter Process with a Glance at the other Licensees. 1920. Sampson Low, Marston & Co, Edinburgh.