I rather enjoy TV shows like ‘Bargain Hunt’ where they try to find valuable antiques for a song.  Sometimes they come across something really old, and get excited to hold something made over 1000 years ago.  That seems an almost infinite time ago, so getting to grips with geological time, measured in millions of years, seems almost impossible.  The Roman system of counting, I, X, C, etc did not use M for 1000 because it was never needed and M = 1000 was not introduced until the Middle Ages, long after the Roman Empire had collapsed.

The most common analogy for imagining geological time is to imagine the age of the earth as a year, so November 6 becomes the date where dinosaurs became extinct.  I can’t imagine the length of a year, so this is almost as meaningless, to me, as the 65 million years ago, when the last dinosaur died. What I can imagine is a distance, so I measure the length of time with a ruler.  1 millimetre, the smallest division on a metric ruler, is 10 years. That means that the whole of my life is less than 8 mm [just], and the first aeroplane struggled into the air less than the width of my index finger ago.  On the same scale, the length of that finger ago, Columbus first sighted America, and thought it was China.

Looking at that finger again reminded me when, some 30 years ago (3 mm), I went to a talk by a detectorist who has found, among other things, a silver ring, which he allowed me to wear.  It was found near Penenden Heath where William the Conqueror had camped in 1066, and from the design, had belonged to one of his henchmen, whose name I forget.  I found it really exciting wearing something that old.  On my time scale that was 10.66 cm away. My span at about 20 cm represents the time, 2000 years ago when Jesus was around and the Romans arrived in Britain.  The building of Stonehenge and the Pyramids at 5000 years ago becomes half a meter, the length of my arm, and a full span takes us back to near the beginning of agriculture and villages.

The extinction of the dinosaurs won’t fit in my room. 65 Million years is 6.5 km. Look on a map to see where that would be from where you are, and imagine how many lifetimes away that is.  Going further back in Geological time needs an atlas as the first common fossils, the trilobites, come in at over 50 km away and if you want to get back to the formation of the earth it is 450 km.  You can work out the distance back to the Big Bang 13400 million years ago for yourselves. [Remove a 0 and the answer is km.]

Geologists were unable to measure geological time as numbers until very recently so used a system of recording time in a similar way to Bargain Hunt. That watch is Edwardian, the wooden chest, Georgian, the silver bowl, early Victorian and the glass came in a container.  You know the order of age, Georgian first, Victorian, Edwardian and Modern. 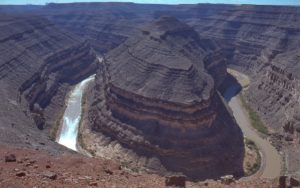 In the same way, Geologists gave names to the rock layers in their area and realised that the oldest must be at the bottom and younger ones piled on top.  In the Maidstone area the sand layer at Sandling, for example, is under the chalk, and therefore older than the chalk.  Just above the sand, at Boxley is a thick seam of clay, above which springs emerge from the chalk.  This Gault Clay is therefore younger than the sand and older than the chalk.  The same rocks, [clay and sand are all rocks in geology], are found at Folkestone and in France. The sandy layers are called Upper Greensand from their colour.  Below this, under Maidstone, is the lower Greensand, containing the Ragstone used in the construction of The Tower of London, Maidstone Prison and many churches.  The southern edge of the Lower Greensand creates the ridge at Loose and below this comes the oldest rocks in Kent, the Weald and Atherfield Clays.   In France the chalk, clay and sand were lumped into a bigger unit called a Period.  In this case the Cretaceous Period from the Latin for Chalk.

The Carboniferous Period, named after the coal, is only found a thousand or more feet below the surface below the chalk cliffs of Dover.  The Dover Coal field and Carboniferous period is therefore older than the Cretaceous.  The Permian Period, named after Perm in Russia where it was first described, was found to have typical Carboniferous rocks below it.  Drilling for coal away from Dover came to nothing as the rocks were similar to those in North Wales which were older than the coal, so there was no point in going deeper.  Eventually a full series of rocks in Europe was put in chronological order.

Note that the column of rock names has no mention of fossils.  By middle Victorian times it was generally recognised that each period had its own suite of fossils so even when there were what appeared to be identical rock strata in different parts of the world, they could be shown to belong to different periods by their fossils.  This realisation came from an understanding of how, for example, a sandstone or mudstone were formed.  In the sea, sand was deposited where there were quite rapid currents that removed the finer material and deposited it in areas with little current.  Over time sand layers became sandstone and mud became shale, mudstone or clay.  But both could be of the same age, just deposited in a different place.  An animal, such as an ammonite, dying in the upper water could drift for miles before sinking to the floor, sandy or muddy, and become a fossil.  Finding a fossil helps date a rock, because very few species seem to live for more than a million years before becoming extinct or changing into a recognisably different species.  Man, you may be pleased to note, is about 1/10 million years old. With the advent of radioactive dating, almost all the rock strata can be given a numerical age. In many cases, the junction between one period and the next can now be dated to within 0.1 million years, using several different methods. 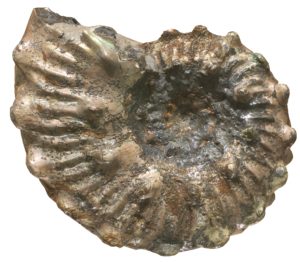 If you would like to find out more and investigate an interactive Geological timeline then there are some fantastic resources for all ages on the website of the British Geological Survey: http://www.bgs.ac.uk/discoveringGeology/time/home.html?src=topNav