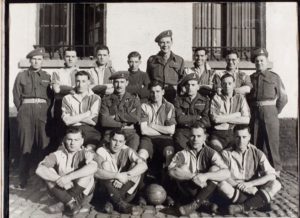 In May 1940 the British and French armies were retreating before the German blitzkrieg. Captain Dennis Talbot, of the Queen’s Own Royal West Kent Regiment was there, but not serving with his regiment. He was on the staff of 30 Infantry Brigade, surrounded in Calais, and was taken prisoner on 26th May 1940.

The prisoners set out on the long march to Germany. The column of prisoners was not well managed, and Dennis Talbot and two other officers managed to slip through a gap in a hedge and escape. They had some money, a map and a little food and decided to make for the coast and try to find a boat to get across the Channel.

When they made it to the coast, it turned out that the Germans had impounded all boats, and there was not one to be found. However, they heard of a party of French soldiers who had a boat concealed in a creek and set out to find them. Having managed to persuade the French to accept them, and to make for England rather than Southern France, the party of ten, in a very small cabin cruiser, set off on June 12th. They rowed to the mouth of the creek, anchored and started the engine, only to discover that it would not start, and in their efforts to persuade it, broke it completely.

They  rowed back up the creek to find a mechanic to repair the engine, which took him four days.

Eventually, on 16th of June they rowed back down the creek. The engine would still not work properly, so they rowed out into the Channel making for Folkestone. The engine packed up. They moored themselves to a mid-Channel buoy and carried on working on the engine, which finally burst into life and worked for two hours to within sight of Dover, when it finally stopped completely. Luckily, they had only eight miles left to go, and they hoisted a towel on an oar as a signal, and were found and taken in tow by HMS Vesper from Dover.

For this adventure Captain Talbot won the Military Cross presented by King George at Buckingham Palace. 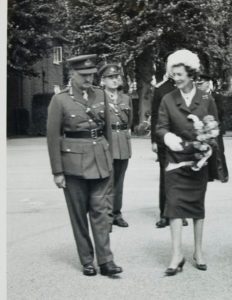 After a distinguished career, Major General Talbot became the last Colonel of the Regiment before amalgamation with The Buffs, The Royal East Kent Regiment in 1961. He continued working for many organisations and was a very active chairman of the Queen’s own Regimental Committee and much involved with the museum.  He passed away in June 1994 and left some of his effects to the museum.