Carriages, Celebrity and Spectacle The photographs of Christina Broom

On the 6th of November 1946 Sir Garrard Tyrwhitt-Drake (1881-1964) could look with satisfaction on the opening of the Museum of Carriages in the Archbishop’s Stables, Maidstone. He was the driving force in its creation because he realised that he was witnessing a decisive change in technology which would see horse drawn transport disappear from ordinary life.

“Thousands of fine examples of the coach builders’ craft have been broken up since the end of the First World War, and I am satisfied that within a few years the only examples in existence will be those in museums, such as this.” 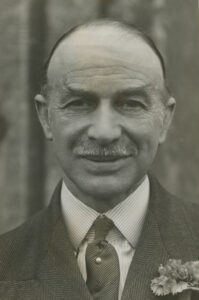 It is a fine and significant collection of original condition horse drawn vehicles, ranging from ordinary trade vehicles to royal carriages, and is visited by Carriage enthusiasts from around the world.

The museum has 415 glass plate negatives produced by the remarkable pioneering photographer Christina Broom (née Livingston) (1862-1939). Her professional working name was Mrs Albert Broom.  Christina Broom took up photography after an accident left her husband unable to work in 1896 and she needed to support her family.  She opened a stationer’s shop at 87 Streatham Hill, SW London which, amongst other things, sold postcards.  These were new and popular. Christina Broom soon got the entrepreneurial idea to produce her own. Initially she borrowed a box camera and started to teach herself photography.  Female photographers at the time generally worked in a studio, but Christina worked outdoors, travelling with her heavy camera on public transport, and photographing street scenes, iconic buildings, and events such as the Lord Mayor’s Parade, the Boat Race and the early activities of the Suffragettes. 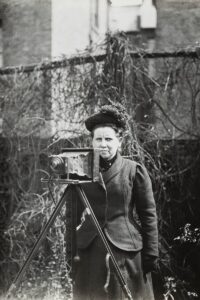 It was a family business. Christina’s daughter, Winifred, started helping with the development of negatives early on and her husband did the lettering on the postcards which were produced at their home. After Albert Broom’s death in 1912 Christina and Winifred moved to 92 Munster Road, Fulham where they continued working together. Winifred being awarded the title of Best Printer in London in 1920.

The glass plate negatives in the Carriage Museum collection all date to the period between 1904 and 1935 when Christina gained permission to photograph the carriages and activities within the barracks of the Household Division and the Royal Mews at Buckingham Palace. She became a trusted photographer of the royals and were later granted privileged access to royal events. She produced photos from these which were featured in publications such as the Illustrated London News, The Tatler, The Sphere and Country Life.  Her skill and tact combined with an eye for the newsworthy made her successful.

According to her daughter the royal connection started with a horse.  In 1904 Christina wanted to photograph the King’s new horse, Kildare, which was at Chelsea Barracks.  She was certain that a print of the horse would sell well. The King’s Groom, Mr Green, stopped her but allowed her to leave her card  for consideration. Edward VII granted Christina Broom permission to photograph the horse, possibly due to a recommendation from Earl Roberts, who supported her as an army photographer. 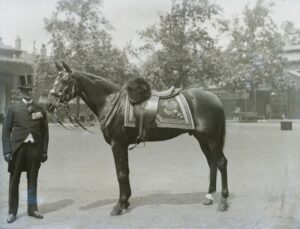 The image of Kildare secured her permission to visit the Mews and photograph the comings and goings. The results are wonderfully observed portraits of the staff, horses, carriages and activities at the Royal Mews.  She is said to have photographed everyone from the stable boys to the Prince of Wales.

During the tourist season Christina Broom set up a stall twice a week and sold the prints she produced in the Royal Mews.  She continued doing this until 1930.

Royal events and state occasions were popular postcard motifs. One example is this, slightly battered, postcard recording the Coronation of King Edward VII in 1902. 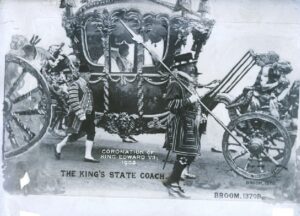 A later example of her event photography is this great street level shot of King George V and Queen Mary from 1916.  We know that the driver was called Mr Newnham. 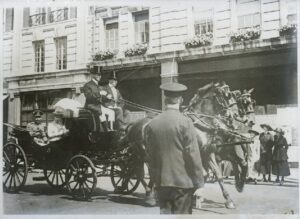 In addition to images of public events and the royals we have behind the scenes views of the stables, horses and people working. Their unpretentious almost documentary style was surely part of their appeal as they make you feel as if you are there.

There is a lovely view of the stables with the famous cream horses at the Royal Mews, as well as several shots of the carriages lined up as the star of the photo. 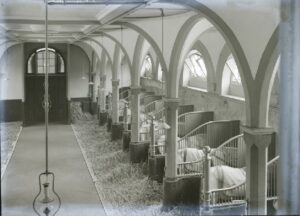 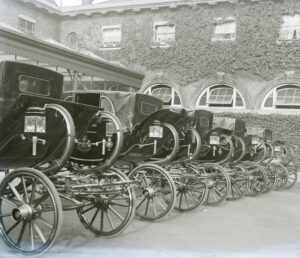 In relation to the Carriage Museum a couple of the carriage portraits are of particular interest. The Carriage Museum holds a number of carriages on loan from the Royal Household, one of which is a hooded Pony Phaeton, also known as a ‘garden chair’. It is a light carriage used to drive around parks and estates in fine weather.  This example has a hood to protect the user from the weather. It was built in 1887 by Cheverton & Co and used by Queen Victoria at Osborne House, Isle of Wight. It is interesting to see some of Christina Broom’s images of a similar carriage. The Royal household had several carriages built by Cheverton. Apparently the carriages commissioned by Queen Victoria have a higher than usual dashboard as she didn’t like seeing the pony’s bottom when driving. Seeing Christina’s images helps bring a familiar museum object to life and reminds us of how it was used, stored and looked after during its working life. 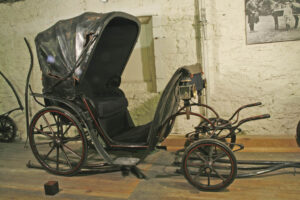 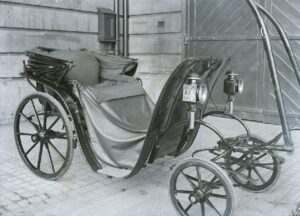 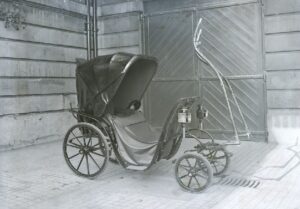 In the photo below the King’s coachman, Mr Mould, is in the centre joined by Mr Lines and Mr Collins, all in their ceremonial livery and seemingly ready to play their role in the next royal event.  It is staged to show them and the carriage off at their best, but no actual event is in progress.  The horses haven’t been harnessed and this is one of many photos showing off the equipment, uniforms and harnesses of the Royal Mews. 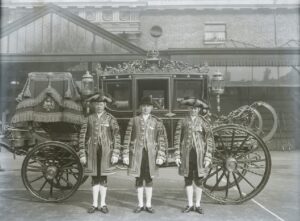 Some of Christina Broom’s best photographs have a busy bustling feel about them. They are perhaps not the best in terms of photographic quality and usefulness for postcard production as they often contain blurring where people and horses have moved, but they are very immediate and engaging.

There are interesting scenes of staff at the Royal Mews at work. Here they are bringing out a landau carriage ready to be pulled by two pairs of horses, two of them have postillions. These are the two mounted men in the photo. 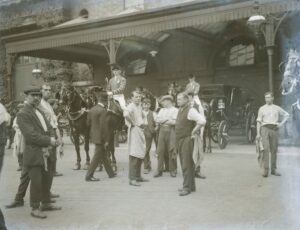 Royal Mews staff are seen, apparently pausing in their work, in the cloisters at the Royal Mews, Buckingham Palace with a pair of horses and a carriage. The man in the bowler hat is a Mr Bird, caretaker of the state coach. 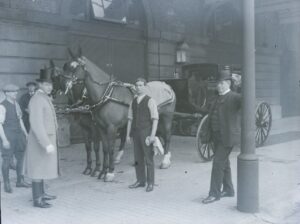 In another photo a coachman stands by the horses in the bright sunshine and is being watched by other staff. It looks like a brief pause before a major ceremonial event. One horse shook its head just as Christina took the photo. 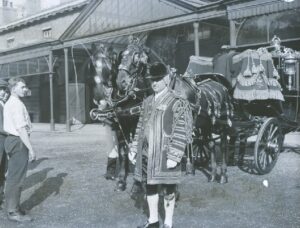 We also hold a few intriguing photos which are not related to the Royal Mews but are on carriage subjects and document high profile events in London.  In 1905 a Coach Marathon was held in Hyde Park and Christina Broom took photographs of the event. Six teams of six Four in Hand coaches and their grooms are lined up for the event with smartly dressed participants seated on top. 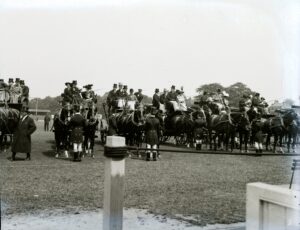 The close up here gives a sense of the size of the carriage and the exciting atmosphere. On this occasion the horses are animated, but Christina Broom managed to get a good photo.  The driver here may be Sir Alfred Vanderbilt, a wealthy American. 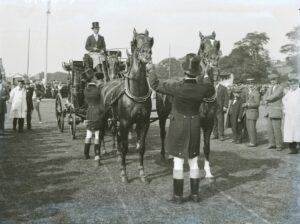 Royalty, wealth and spectacle were all popular motifs in Broom’s photography, but who can resist a fire engine? It is unclear what this event was, or when the photograph was taken, but is shows a smartly turned out horse drawn fire engine and crew, seemingly as part of a procession with an audience lining the street. 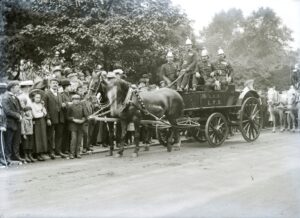 During her later years Christina Broom suffered from crippling back pain and needed to use a wheelchair. She retired to Margate where she died on the 5th of June 1939. She had come to be known as the UK’s first female press photographer and in 36 years of work Broom had taken around 40,000 images.

Winifred Broom safeguarded the work and legacy of her mother and started the process of rehousing her negatives into public institutions in the years after 1945.  Christina Broom’s negatives across various subjects are now held in the National Portrait Gallery, Imperial War Museum, National Museum Scotland and the Museum of London. In 1954 her images from the Royal Mews entered the Carriage Collection in Maidstone where they fit with the subject matter of horse drawn transport and the royal links of some of the carriages on display. 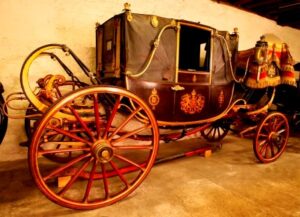 Christina Broom’s images have an intimate and effortless quality. They are a wonderful window into the past and help us imagine the carriages we have in the collection in use.  The portraits of staff and behind the scenes views at the Royal Mews are wonderfully vivid and remind us of the many skilled people who worked with horses and carriages in the past.  In this way they are a perfect complement to Sir Garrard Tyrwhitt-Drake’s vision of preserving the memories of horse drawn transport. We can admire not just the coachman’s craft, but also get a feel for the context that carriages, like Queen Victoria’s State Landau, were used in.

Learn more about carriages and explore our carriage collection online on the Carriage Foundation Website:  https://www.thecarriagefoundation.org.uk/

Here is a link to a video titled ‘Coaching Marathon Reaches From Hyde Park To Richmond’ on the British Pathé website. It took place in 1926: https://www.britishpathe.com/video/VLVA948CA99R6TWM6Z4WT247597VX-COACHING-MARATHON-REACHES-FROM-HYDE-PARK-TO-RICHMOND/query/SHOW+JUMPING

Museum of Carriages Guidebook and Catalogue 1987

[1] Museum of Carriages Guidebook and Catalogue 1987.