Albert Goodwin (1845-1932) was a Kentish artist, whose output of paintings, principally watercolours, was prolific. Maidstone Museum is fortunate to have a collection of over 200 paintings and drawings, predominantly in watercolour, that illustrate his artistic influences and travels. 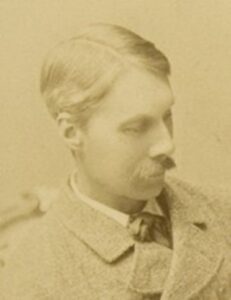 Albert was the seventh of nine children and was raised in Maidstone, born in what is now 62 Boxley Road. As a young boy he became an apprentice draper in the town. It was around this time, that his natural flair for drawing was recognised.

The young Albert was encouraged in his art and became a pupil of Arthur Hughes in 1855. In the early 1860s Goodwin moved on to work in the studio of the Pre-Raphaelite founder Ford Madox Brown.

These artistic foundations put him into contact with the Pre-Raphaelite and Arts and Craft luminaries William Holman Hunt, Dante Gabriel Rossetti, William Morris and the eminent art critic John Ruskin, who was to become both his friend and mentor. 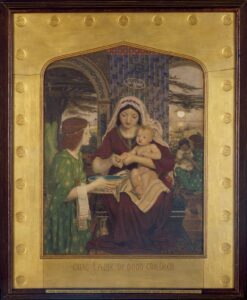 It is probable that Goodwin undertook the lettering on the frame for this artwork, as a pupil of Madox Brown at the time.

In 1872 Goodwin’s eyes were opened to differing lights, vistas and forms of natural inspiration, by a three month tour of Europe made with Ruskin and a fellow artist Arthur Severn. Goodwin made a large number of annotated sketches and watercolour studies direct from nature a method he used, alongside working from memory, throughout his career.

“…..nature has an endless storehouse to draw upon and to draw from…..”

These ‘flying sketches’, as Ruskin called them, were later used to inform finished works, or worked up in colour in his studio while the memory of a place was fresh. In his diary Goodwin wrote “To me this method of work is one of the happy things of the art that I practise, for I get the realisation of a place twice over, and often the memory makes the scene a better one than the first experience.” (Diary, 1917, p371) 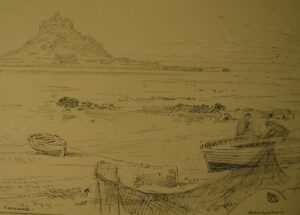 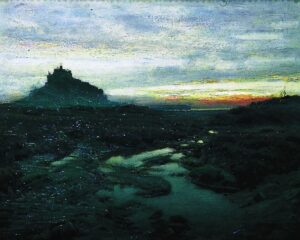 An example of one of Goodwin’s ‘flying’ sketches

The worked up oil painting from the original sketch.

Goodwin travelled throughout his career, finding inspiration in Europe (particularly Switzerland, Italy, Norway and Holland) as well as the West Indies, India, Egypt, New Zealand and Australia. Closer to home he was inspired by the countryside in Kent, Sussex and Devon, places where at various times he made his home.

“There is to me a charm in the so-called imagination picture, which the mere portrait of a place does not contain.  One gets free play for whatever one has of the inventive faculty, and you are not tied down to hard facts.” 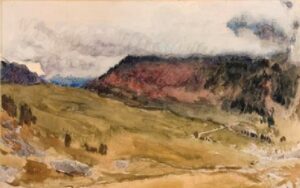 Produced on the European tour with Ruskin 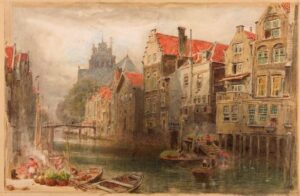 Note the difference in style between this artwork and that of the Ruskin tour (above) some 9 years earlier.

Goodwin exhibited his first oil painting ‘Under the Hedge’ at the Royal Academy in 1860 and, having established his name as an artist, moved into watercolour work. In 1871 he was elected an Associate of the Old Watercolour Society and in 1881 became a full member. The medium allowed Goodwin to work rapidly on a number of different drawings at one time and gave him the ability to complete many works. He exhibited 792 paintings with the Royal Watercolour Society in his lifetime.

“No one save the water-colour painter (who is used to carrying his work to the extreme of finish), can understand the amount of hammering, sponging, scratching, sandpapering, washing etc, that has to be done to a drawing which will not “come”!” 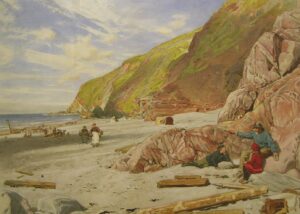 Lynmouth: The story of the shipwreck, Albert Goodwin, Watercolour, 1882 (Bentlif 120)

Goodwin created this artwork in both watercolour (above) and oil (below) 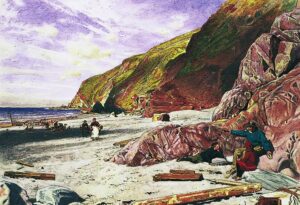 The Successor of Turner

Goodwin excelled in painting topographical and landscape scenes, deftly depicting colour, form and incorporating tone through light and shade. Ruskin had impressed upon the young artist the importance of form and the work of Turner. In 1911 Goodwin wrote in his diary, “I sometimes wonder if the spirit of old Turner takes over my personality. I often find (or think I find) myself doing the very same things that he seemed to do.” This viewpoint was shared by critics, a contemporary review in ‘The Standard’ on October 30th 1893 commented: “In water-colour drawing Mr. Albert Goodwin is the legitimate successor of Turner.” 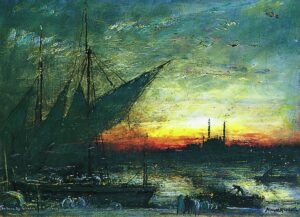 This scene of India shows ‘Ghats’, steps down to a river landing place and is typical of many of Goodwin’s ‘potboilers’ and was possibly painted from memory. The colour palate is quite dark except for the use of red, orange and yellow along the horizon.

Goodwin sporadically kept a diary for the last forty years of his life. Following his death in Bexhill-on-Sea on the 10th April in 1932 aged 87, his family edited his diary notes and published them two years later. The diary brings to life his opinions and character and gives an insight into his working methods.

“…..it can hardly be right to have so much enjoyment in one’s occupation, save that the assurance that the “mercy is twice blessed,” that others partake a measure of one’s delight…..” 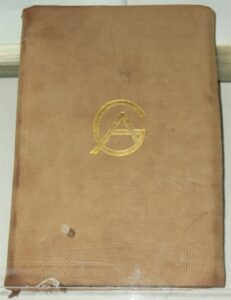 Published in 1934 for private circulation within the family from Albert’s handwritten and typed diary notes.

In 1909 he writes, “One of the things I think that gives me each year fresh enjoyment in my work is the realm of experiment…”. For Goodwin, art wasn’t repetitive if he experimented with new ways of working. He relished the challenges of using tinted papers, firstly for pen and wash studies and later with combinations of watercolour, crayon, pastel, oil paint and pen. He wasn’t averse to mixing media, combining them in order to get a desired atmospheric effect. The versatility found in mixing differing media, in particular incorporating pen into watercolour and oil paintings to define form, made, (and continue to make), Goodwin’s delicate visionary landscapes popular.

“One of my principal enjoyments in the continuation of the art which has been a ceaseless cause of pleasure all my life, is in discovering new ways of working: new aspects of old things, and consequently new beauties in things which require new interpretations.” 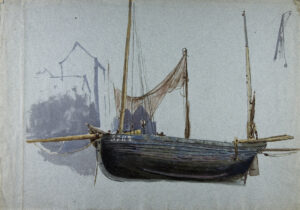 An example of Goodwin experimenting on coloured papers. 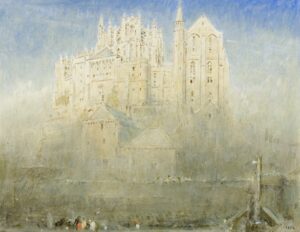 Goodwin juggled a successful career as an artist for over seventy years with the responsibilities of family life. For Goodwin, “The habit of painting, like second nature, seems part of myself.” (Diary, July 9th 1900, p34). He wrote in his diary that he often felt that his art and travels led him to neglect his wife and seven children. Albert and Alice (his second wife) had five girls and two boys. This led him on occasions when frustrated with his work, to ban himself from painting to dedicate time to his family.

“I have had a good deal of “Paradise” here – a profession which is a delight and a success in it, and greatest of all the love of wife and children” 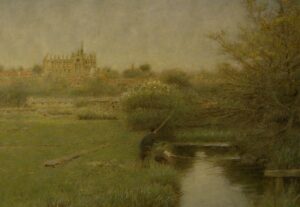 Goodwin and his first wife, Mary, lived for some time in Arundel, the subject of many of his works.

To his friends Goodwin was affectionately known as ‘Bogie’. He didn’t drink alcohol or smoke and enjoyed a healthy lifestyle. A keen swimmer and in later years, cyclist, he remained in good health until with old age his eyes became weepy and his hearing poor. He remained throughout his life a quiet, earnest and practical man who enjoyed “…pleasant days spent in the midst of pleasant family life, doing pleasant work…” (Diary, 26th December 1909, p121) 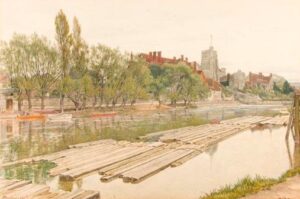 Goodwin also painted local views around Maidstone, a number of which (in watercolours and oils) are in the Maidstone Museum Collection

Back to the Collection

The museum’s Albert Goodwin Collection is the largest in public ownership, and as such, the museum has a gallery wall dedicated to Goodwin and his brother Harry (who was also an artist). Goodwin’s artworks have certainly stood the test of time, and remain popular today being fresh, available in a multitude of media and sizes to suit different tastes, are hugely atmospheric and show the influences of his training. The museum has also created a touring exhibition to enable the artworks to be enjoyed further afield: https://museum.maidstone.gov.uk/albert-goodwin-visionary-landscapes/