A piece of the action

A piece of the action, our relics of Waterloo and other Napoleonic memorabilia

On June 18 1815 at the Battle of Waterloo, the Duke of Wellington, Marshal Blücher, and their Prussian and allied army of British, Dutch, Belgian and German Units defeated Napoleon and put an end to 23 years of recurrent warfare. The battle, which took place in present day Belgium, was large and bloody and put a decisive end to Napoleon’s extraordinary career which had changed Europe. Waterloo has entered popular consciousness with the phrase “meet your Waterloo” defined by The Cambridge Dictionary as; “ to be defeated by someone who is too strong for you or by a problem that is too difficult for you”. Waterloo was even given a further lease of life by Abba in their Eurovision contest winning song from 1974. The battlefield itself soon became a tourist destination and the Napoleonic wars and its protagonists continue to be a source of fascination. National and international events such as Waterloo are not always reflected at a local level, but the Napoleonic wars have left their traces on Maidstone and in the Museum collection, which we will discover in this blog.

The Georgian era (1714-1830) saw many changes in society with the beginning of Industrialisation and new political and religious ideas, as well as the demands of the wars abroad.  There was a considerable military presence in the Maidstone area including training of troops in Coxheath with permanent barracks being established in around 1797.

In 1798 the Kent Volunteer Brigades were formed in response to the hostilities with France.  In the collection we have a watercolour by William Alexander of the mustering of more than 5000 volunteers in 1799 by Lord Romney in Mote Park, where they were inspected by George III and treated to dinner. An event which was still recounted with considerable pride when J M Russell wrote his account in the history of Maidstone from 1881. 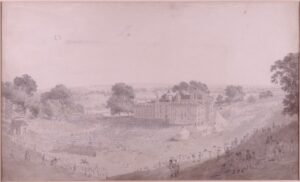 William Alexander, The review of the Kentish Volunteers in Mote Park by George III

In 1803 a French invasion was feared, and the volunteer movement was strengthened.  The county was divided into four districts under the charge of a deputy Lieutenant and more volunteers were enrolled. Work was undertaken to strengthen defences, this included the building of Martello towers and fortifications at Dover Western Heights, Rochester and Chatham. A system of signal beacons was also set up.  The conflict had economic and social effects on the area with high prices and unrest over the cost of food and taxation.

It is little wonder that the dramatic end of this long war should be thought worthy of commemoration, so the government issued the first ever campaign medal.  The Waterloo Medal was given to soldiers of the British army (including the King’s German Legion) who was present in the campaign of June 1815 serving in the actions at Ligny and Quatre Bras  on the 16th June,  present on the 17th June or took part in the main battle itself on the 18th June.  Soldiers at Hal and Tubize were also awarded the medal despite seeing no action. At Maidstone Museum we have the Waterloo medals of 4 recipients: 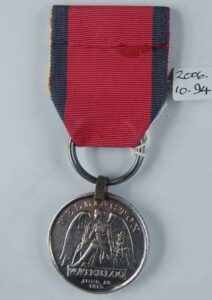 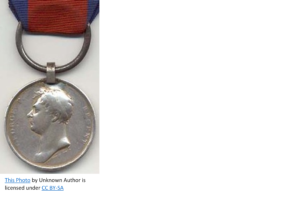 Obverse of Waterloo Medal with image of Prince Regent

The medal has the recipient’s name, rank and regiment along the edge and shows a profile of the Prince Regent, later George IV, on the obverse.  On the reverse is a seated figure of Victory above a tablet inscribed WATERLOO and the date of the battle, 18 June 1815. The medals were produced by the Royal Mint which has a roll of all the recipients.

Two of the medals in the museum were part of private collections of medals put together to reflect important military events of the past.  These were later donated to the Museum; one in 1921 and one in 2006.  It is unknown when the two earlier medals entered the collections.

The museum also holds items which show the early interest in visiting the battlefield, with travel documents issued to a Mr George Wise at Ostend before a visit to the field of Waterloo in 1815 and records of various articles ‘picked up at the field of Waterloo’.  One item, a large gourd, was donated in 1957 and helpfully carries the inscription on the bottom: “picked up at Waterloo after the battle by my grandfather Robert B Bowler 1815”.  It is thought it might have been used as a water bottle.  There is no doubt donors of these items ‘found on the battlefield’ genuinely belived the authenticity of the objects, but there is also the possibility that tourists to the site were sometimes told good stories, and sold fakes. 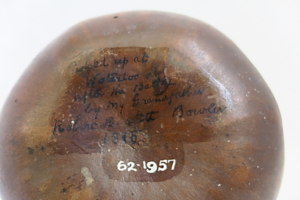 MNEMG 1957.62 Gourd picked up from the field at Waterloo.

In the QORWK museum there is a bust of the Kent born Field Marshall Viscount Henry Hardinge (1785-1856) who entered the army in 1799.  He served in the Peninsular War (1808-14) and during the 100 day return of Napoleon, he was Brigadier General with the Prussian army at the Battle of Ligny where his left hand was injured and then amputated. He therefore didn’t take part at Waterloo.  In 1852 Hardinge succeeded the Duke of Wellington as Commander of the British Army. The bust dates to 1854 and was made by John Henry Foley. 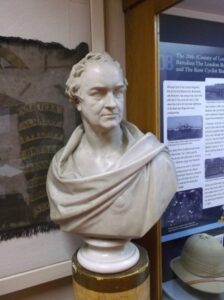 This brings us to Arthur Wellesley, the 1st Duke of Wellington (1769-1852). The famous Irish born commander of the British army, who rose to prominence in India, had many successes in the Peninsular and won immense fame from his role in defeating Napoleon at Waterloo.[4] Unlike the other great hero of the Napoleonic Wars , Nelson, the Duke of Wellington lived for many years afterwards and became Prime Minister, which means that although he was perceived as a great man, he was also subject to criticism in the cut and thrust of the politics of the day.

He was immortalised in various forms, including pottery. The collection contains a Staffordshire teapot produced just after 1815 depicting Wellington on his horse.  It was donated in 1883 along with plaster busts of Wellington and Napoleon as the main protagonists, which were donated in 1898.

George Baxter, the 19th century pioneer of colour printing, also made a popular series of important figures and included portraits of Wellington and Napoleon in his popular series, examples of which are held in the collection. 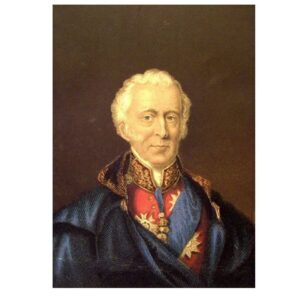 Portrait of the Late Duke of Wellington, George Baxter, A263 B222 ©The New Baxter Society 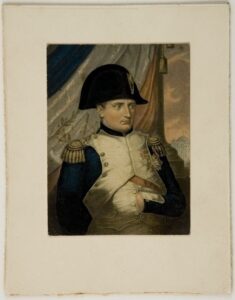 Napoleon Bonaparte (1769- 1821) was the ultimate adversary.  His rise to power from modest beginnings was meteoric. He served the National Convention governing France after the revolution and later became First Consul (1799-1804) and Emperor of the French (1804-1814/15). Alongside ambitious administrative reforms of society he remained committed to the extension of French power, which in 1810 was at its fullest extent.  The turning point came with the Russian campaign of 1812 and in April 1814 he was forced to abdicate. He then returned from his exile in Elba for his 100 day campaign culminating in Waterloo.

After the defeat at Waterloo, Napoleon abdicated for a second time on the 22nd June 1815 and in October 1915 embarked to St Helena where he lived the rest of his life in exile, dying on the 5th May 1821.

The demise of this formerly powerful man held immense fascination for the public, and in 1911 the Maidstone Museum Curator, H J Allchin, discovered a pencil drawing in the collection thought to be by Captain Marryat, later famous as a novelist.  The drawing depicts Napoleon on his death bier.  It is unclear exactly how this drawing entered the collection, but it may have arrived with the other star object linked to Napoleon, a low cane chair, which is said to have been used by Napoleon Bonaparte during his captivity in St Helena.  According to Allchin’s research the chair was purchased by the Reverend R Boys, who was chaplain to Sir Hudson Lowe, the Governor of St Helena.  The Reverend R Boys later became a Vicar of Loose, near Maidstone and a little bit of the great adventure came home to Maidstone.  When the Reverend R Boys died, it was bought by local philanthropist, Alexander Randall, and presented to the Museum. 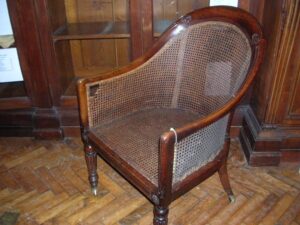 The chair is in a good condition and is usually on display.

Following this trail of objects in the Museum collection it has been an interesting journey, discovering how the people of Maidstone related to the events and big personalities of the Napoleonic wars.  Some objects were collected at Waterloo as mementos of the battle or, like the chair, had a personal association with a main protagonists and later donated to the Museum.  Donations were especially plentiful in the later 19th century. Other objects are popular representations of Wellington and Napoleon, showing us how they were represented and how their image entered popular consciousness.  The objects are in the collection because this was a conflict that leading members of the community wanted to remember as significant and shaped how the British viewed themselves and their history.

With thanks to Steve Finnis for searching the Medal Roll.

Mather, Ruth PhD, The impact of the Napoleonic Wars in Britain, British Library 15 may 2014 https://www.bl.uk/romantics-and-victorians/articles/the-impact-of-the-napoleonic-wars-in-britain Accessed 27 May 2020

For a brief accessible account of the battle and more objects see the National Army Museum Website: https://www.nam.ac.uk/explore/battle-waterloo