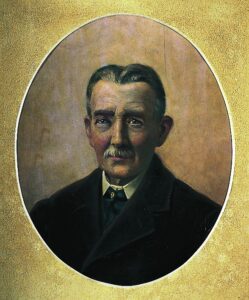 Around 100 years after it was originally written, I’d like to share a lecture presented by JH Allchin, Curator of Maidstone Museum from 1902-1923, on Maidstone artist, William Alexander. As a successor at the museum in a similar role to the original writer, I have transcribed extracts from Allchin’s lecture, and added images of Alexander’s artworks from the museum collection which numbers around 60 works, one of the largest in public ownership. I wonder if in 100 years’ time my successors will discover the talks I have been giving now, and if they will have aged as well as Allchin’s!

Extract from a Lecture on William Alexander by J H Allchin, Curator of Maidstone Museum

In the preparation of the following brief sketch of the life of William Alexander, one of Maidstone’s sons, I have been greatly helped by notes very kindly furnished me by a gentleman, for many years a resident of Maidstone, and whose names is no doubt familiar to some now present, viz Mr Edward Hughes. Mr Hughes’ mother and William Alexander were cousins, and, as the former says, he is probably the only man living who possesses any accurate knowledge of Alexander and his life [*at the time of the lecture in the early 1900s*].

I am also indebted to a biographical note in the Gentleman’s Magazine of 1816, the year of Alexander’s death, written by one who signed himself ‘Veraɘe’ and who was evidently an intimate friend of Alexander’s. 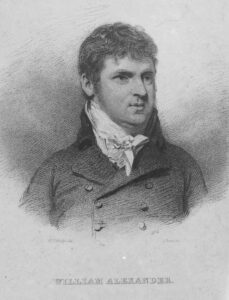 William Alexander was born in Maidstone on April 10th 1767. His father, Harry Alexander was a coach maker in business in the town, and the son received his education at the old Maidstone Grammar School in Earl Street, formerly the Hall of the Brotherhood of Corpus Christi, one of the relics of the past history of the town, but now alas, almost entirely shut away from public view, and, one cannot refrain from saying it, desecrated by the use to which it has descended [*This beautiful building has since been renovated and changed use to a restaurant*]. 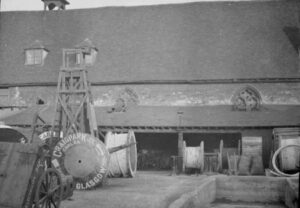 The then master of the school was the Reverend T Cherry, subsequently Head Master of Merchant Taylors’ School in London.

Alexander left Maidstone when he was 15, and went to London where he studied under a Mr W Pars in the first instance, afterwards under Mr Julius Ibbetson, a landscape painter, and in 1784 he was admitted as a student in the Schools of the Royal Academy.

During the succeeding eight years he applied himself very sedulously to the study of the art of drawing and painting, and received strong encouragement from Sir Joshua Reynolds, then President of the Royal Academy. 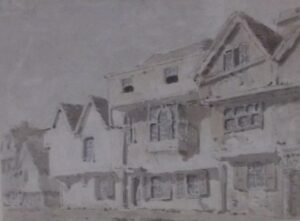 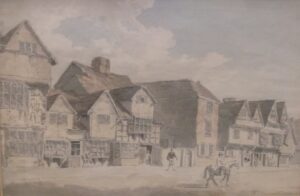 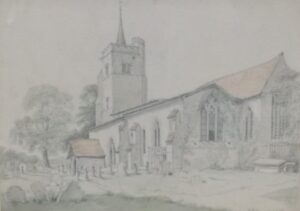 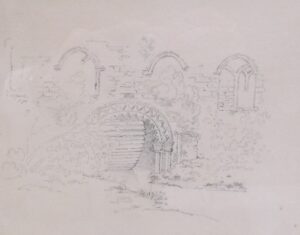 In 1792 his artistic ability received recognition from the Government in the appointment of assistant draughtsman on the staff which accompanied Lord Macartney in his Embassy to China. The circumstances of the appointment are not known nor through whose intervention he was selected, but Mr Hughes thinks, with very good reason, that the excellent quality of Alexander’s work was a sufficient foundation for the appointment, which was certainly a very happy one, as the result proved, for he bought back with him a large collection of most valuable drawings of places which the Embassy passed on route, and of Chinese scenery, architecture and people. 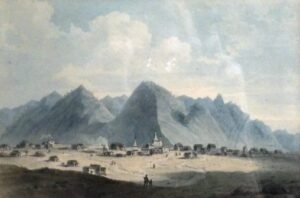 A view in China by William Alexander, Watercolour (MNEMG 217) 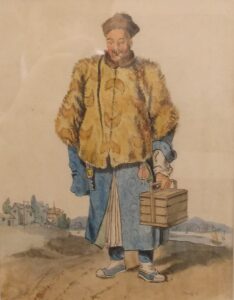 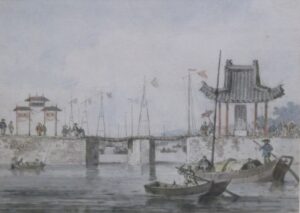 Although Alexander was not appointed Chief draughtsman to the Embassy, that post having been given to a Mr Hickey, there is no doubt that the former did all the important work, for very little indeed is known of the productions of his Chief on the Staff, and the probability is that his appointment was one of personal favour, and not in any way according to merit.

The drawings which Alexander executed in the course of his visit to China were published as illustrations to “An Authoritive Account of our Embassy from the King of Great Britain to the Emperor of China”, written by Sir George Staunton, Secretary of the Embassy. In the British Museum there is a manuscript account of the journey by Alexander himself. This was presented to the Institution by Mr Hughes, a few years ago, but which we would have gladly welcomed here.

The Embassy returned to England in 1794, and in the following years Alexander married a Miss Wogan, a Welsh lady, but their union was of short duration as she died not long after their marriage, and Alexander never ceased to mourn her loss.

Between 1794 and 1802 Alexander was occupied in preparing his drawings of China and other views for the engraver, and in executing drawings for another work, Captain Vancouver’s voyage to the North Pacific. 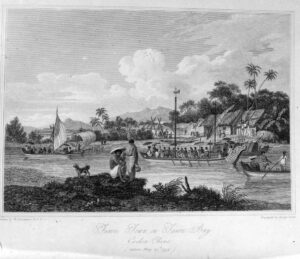 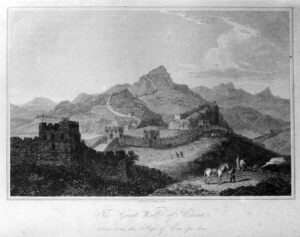 The Great Wall of China, near the Pafs Of Cou-Pe-Koo, from a drawing by William Alexander, Engraving (MMPC-C21-21H0011) 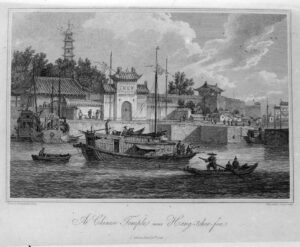 In 1802 he was appointed Professor of Drawing at the then newly formed Royal Military College at Great Marlow, and held that appointment until 1808, when he was selected for the post of Assistant Keeper in the Department of Antiquities in the British Museum, and in that sphere of work he formed a congenial occupation for this talents, which he employed in making drawings to illustrate a “Description of the Collection of Ancient Marbles in the British Museum”, three volumes of that work filled entirely with plates from Alexander’s drawings were published in 1810, 1812 and 1815, by the Trustees . . . . . . . and he completed the drawings for the fourth volume shortly before his death.

Among other works that he projected was an Historical Account of Greece, and with that end in view he collected a large amount of material, including drawings by Turner, Girtin and other artists, but death interfered before he could carry out his intention.

It would be interesting to learn what became of that collection after his death, in all probability it was broken up and dispersed at the sale of his effects by Messrs Sotheby in the November immediately following his decease, and the items were no doubt scattered in every direction.

The subject of this brief sketch died from an attack of brain fever on July 23rd 1816, when only 49 years of age, whist on a visit to an uncle who resided at Rocky Hill [*Maidstone*], and the only notice of his death which I can find in the local press of that period is the following which appeared in the Maidstone Journal of July 30th, “On Tuesday last, at the residence of his uncle, Rocky Hill Maidstone, aged 49, William Alexander Esq., of the British Museum, F.S.A”. 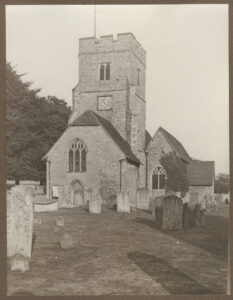 He was buried in Boxley Churchyard on Saturday July 30th, and a little later a table was affixed to the wall inside the church, where I believe it still remains.  (South Wall – West side of porch doorway).

[*The memorial table inside the church reads: “Near this place lies the remains of William Alexander F.S.A. One of the Librarians of the British Museum. He accompanied the embassy to China in 1792 and by the power of his pencil introduced into Europe a better knowledge of the habits and manners of China than had been before attained”*].

His brother James was also a draughtsman of considerable skill, especially in pen and ink work, as some examples which have recently come into our possession from across the Atlantic testify. 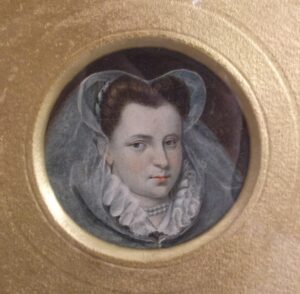 Back to the present day – now in the 21st century, William Alexander’s artworks from the Embassy visit to China continue to draw a particularly vivid picture of how China and the Chinese must have appeared to the late 18th century members of the visit, and even to Allchin who was curating the museum collection in the early 20th century. The museum holds over 20 large colour-wash drawings from Alexander’s visit to China, representing his polished style depicting the scenery, peoples and costumes of China. In addition to the Chinese views, the museum also holds around 40 works of his British views and landmarks. As a draughtsman Alexander occupied a high position, his works being distinguished by great refinement and truthfulness. He was also an excellent engraver, and the British Museum has a large collection of artworks by him, a sign of the distinction with which he is/was viewed.